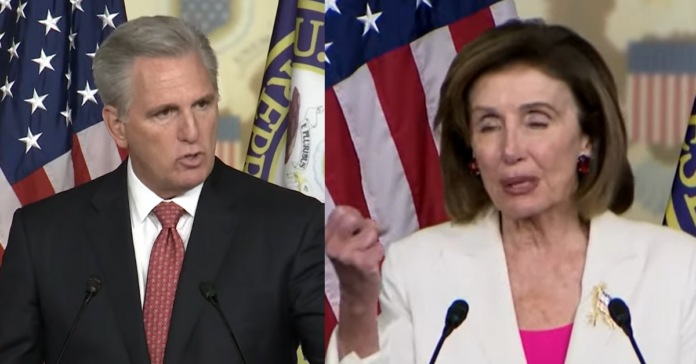 “Kevin McCarthy. Every single crisis is preventable and we can solve every crisis as well, just return to the ones, the policies on energy, on borders, on the economy, on foreign policy that were working under Donald Trump,” Hannity said.

McCarthy said: “The sad part about it, you are right. Had Joe Biden literally gone to sleep come our country will be stronger. We would be energy independent. It would be China and Russia winning, it would be America that was winning.

“Our borders would be secure. We wouldn’t have rising inflation. This is the problem. One-party rule in one year. But the good news is, in less than one year we can fix this country if we fire Nancy Pelosi pair that is why need everybody to go to firepelosi.com.

“Join the fight. It’s not just Republicans, Democrats, independents. If you care about this country, if you want to change the course of history, we can do it and we can make it happen.”

Hannity asked: “Let’s talk about in less than a year, this agenda, if Republicans take back either the house or Senate or both, the agenda ends completely, correct?”

McCarthy said: “Correct. No longer do you have to worry about the filibuster, because what will come out of the house you will be supporting.

“The gasoline price will be lower, the border will be secure. In nine months, they had 1.4 million encounters come up illegally across this border.

“That is more than 2018, 2019, and 2020 all combined in the middle of Covid. You know what the Democrats continue to do? They are changing the course of history.

“I spent some time, I don’t know if you listen the other night, speaking on the floor a little longer than one minute. I didn’t set out to break any laws or any records.

“I wanted to break this bill down. I wanted America to know that they are hiring 87,000 IRS agents. Why?

“To go after your transactions, your records if you spend as little as $28 a day.

“You know what they are doing too?

“They are knocking parents out of schools.

🚨 🚨 🚨
While families were struggling to put gas in their cars and food on their tables due to inflation, Democrats in Washington voted to give backdoor amnesty to 6.5 million illegal immigrants in their tax & spending bill.

Americans deserve a government that puts them first. pic.twitter.com/rGpqdJCPkW

Gas prices have soared nearly 50% in a year, “the largest percentage increase in at least a decade.”