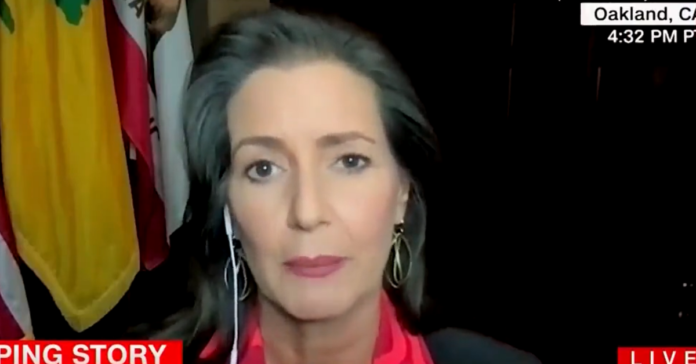 Oakland Mayor Libby Schaaf came clean on CNN last night and denounced then defund the police rhetoric saying it hurt police recruitment and she said Oakland needs more police. She said because of rising crime she is trying to staff up at the police department:

“We want people to be proud of being in this service to our community and we are going to be staffing up. That is a necessity at this moment where we are with our crime in this season.” Below is a transcript of her conversation on CNN and below that is a video.

KATE BOLDUAN, CNN HOST: Josh, thank you so much for that reporting. OUTFRONT with me now is Libby Schaaf. She is Democratic mayor of Oakland, one of the city’s that’s been hit by these smash-and-grab robberies. Mayor, thanks for being here.

You heard Josh Campbell just talk about the security guard, the guy was — the man who was working security who was shot and killed while protecting a local news crew in your city. I mean, that is a tragedy, by itself. But does this speak to a bigger problem? I mean, how concerned are you?

MAYOR LIBBY SCHAAF (D), OAKLAND, CA: Kate, it does. Oakland had been successful at cutting gun violence in half, and sustaining those reductions for more than five years. But with COVID, we saw that progress undone. And the horrid death of Kevin Nishida is one example of so many tragedies.

Every injury, every death caused by gun violence is an absolute loss for the community. And we, for one, are committed to having a comprehensive and effective approach to stopping it.

BOLDUAN: I think — and the big question for you, mayor, as well as mayors in other major cities because these are happening in many cities now — is what does comprehensive mean? And what is the solution to stopping this? I mean, what are you doing now to do that, to stop this from happening again?

SCHAAF: Well, we already doubled down on prevention as well as standing up a non-police response option.

But let me be clear: Oakland needs more police. We have been impacted by staffing reductions. COVID interrupted our recruitment and training processes. And the defund rhetoric is challenging our ability to attract and retain recruits. And we know that that is not unique to Oakland.

But let me be clear: We appreciate the incredible service of the hardworking men and women that are in our police department. Oakland has been ranked number one by Eight Can’t Wait as the major department in the country that’s been most successful at reducing racial disparities in arrests.

We want people to be proud of being in this service to our community and we are going to be staffing up. That is a necessity at this moment where we are with our crime in this season.

BOLDUAN: But look, Mayor, I mean, you say you need more police. The police chief has asked for help. The police union says that the officers who are on the job right now are hitting a breaking point.

I want to read for you — and I am sure you have seen it — what the president of the — of the police union wrote in an op-ed. Writing in part, many officers and their families have had enough of mandatory overtime, the lack of support, and the city’s unwillingness to stem the tide of violence or even condemn it.

They leave the cities — meaning, these officers — they leave for cities that value their service, experience, and professionalism.

Mayor, it does not sound like there is a quick fix to this.

SCHAAF: But that’s why I believe now is the time that the leadership will come together to say we need to maintain basic levels of police staffing. That is what we are going to be demanding of all city leadership to get behind. And that’s what I believe that we can do, together, because this unacceptable loss of life.

We — we know what has worked in the past. And it’s not just police. We are looking at the interruption of our entire criminal justice system, the court system, the impacts of new policies with regard to bail. Everything is on the table, as we look at a comprehensive approach to turn the tide of this spike in violence.

No one is — is absent from being part of the solution and we have to have better coordination. I mean, you talked about the coordinated impacts of these criminal caravans. We need state and federal resources to interrupt those efforts. Lord knows, they’re coordinated. We need to be coordinated, as well.

BOLDUAN: Mayor, thank you very much for your time.

Doocy Flushes Out Something Interesting About Joe's Decision On Waukesha, WI