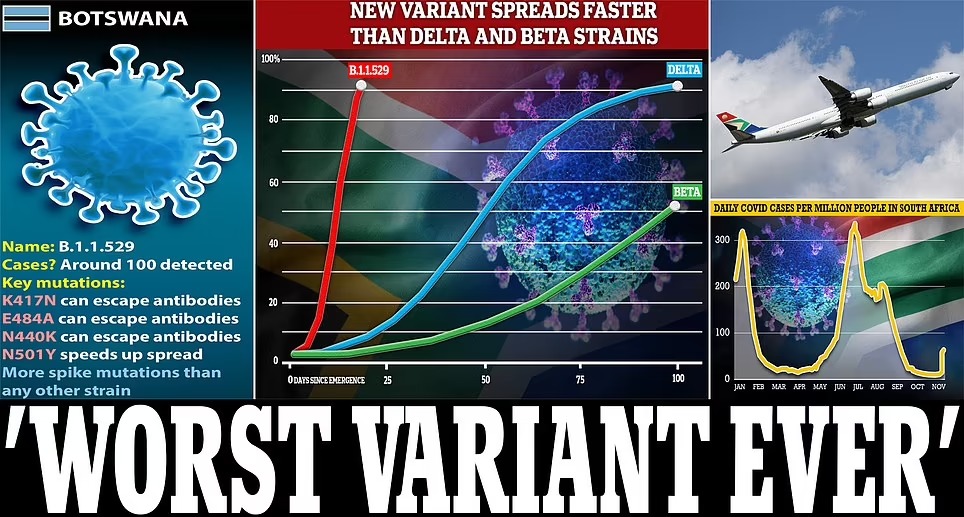 Everywhere you look the “Botswana variant” is making news.

And Dr. Fauci is now playing the role of the “calming scientific voice of reason.” He says he’s not convinced that the variant is in the US.

As if we don’t realize this is his way of appearing like a rational scientist who isn’t pushing a political agenda.

This way, when he comes out and announces this scary variant has landed on our shores, it’ll feel much more “credible.”

We’ve seen this game before. We know the playbook, Doc.

There is "no indication" that a new coronavirus variant that has been discovered in South Africa has surfaced in the United States, said Dr. Anthony Fauci said Friday. https://t.co/C0CU7vN4vp

Many Americans have lost faith in Fauci, and the “science community” as a whole, thanks to all the politicizing, flip-flopping, and misinformation that’s come from this once-highly respected group. It’s true, social media really has exposed how flawed and buffoonish our “elites” really are.

Back in the day, Dr. Fauci could get away with a lot more than he does today. Social media has amplified the lies, flip-flops, and missteps that he’s made with COVID.

Thirty years ago, when social media wasn’t a “thing,” and Fauci was overseeing the AIDS crisis, his naysayers and critics were virtually unheard.

But they were out there.

Check out this photo that’s making the rounds online of a protest over the aids epidemic. The man holding the sign that says, “Dr. Fauci You Are Killing Us” is bone-chilling.

Here we are thirty years later, and an entirely new group of people are saying the exact same thing to him. It’s like we’re in some bizarre Twilight Zone episode where the past has come back to haunt us with the same villain.

This picture is 30 years old. pic.twitter.com/6rzXr7dH4K

I want to show you something that I found from 1988. It’s an “open letter” to Dr. Fauci that was printed in a San Francisco newspaper. It’s long, but well worth the read:

Anthony Fauci, you are a murderer and should not be the guest of honor at any
event that reflects on the past decade of the AIDS crisis. Your refusal to
hear the screams of AIDS activists early in the crisis resulted in the deaths
of thousands of Queers. Your present inaction is causing today’s increase in
HIV infection outside of the Queer community. We are outraged that Project
Inform, an organization that supposedly works on behalf of the infected
community, would insult us by bringing you to our city. You can’t hide the
fact that you are nothing but a despicable Reagan-era holdover and drug
company mouthpiece.

With 270,000 dead from AIDS and millions more infected with HIV, you should
not be honored at a dinner. You should be put before a firing squad.

Anthony Fauci, you are a murderer because you oversee government sponsored
clinical trials that test and retest combinations of immunosuppressive, toxic
therapies that kill people with HIV. The majority of U.S. clinical trials
involve worthless antivirals like AZT combined with some other drug
(generally another toxic antiviral). What these tests have proven is that you
are able to piss away billions of dollars testing dangerous compounds that DO
NOTHING to improve the quality of life, to stop opportunistic infections or
to extend survival for people with HIV. AZT, 3TC, ddI, ddC, d4T and the
current crop of protease inhibitors are nothing but poison. Ten years of the
plague has shown us that trying to kill the virus kills people with AIDS, and
you, Dr. Fauci, know it.

How long will it take you to start focusing on the immune system, how to
boost it and how to prevent the opportunistic infections that are killing
people with AIDS? Even you admit that “the immune response against HIV is
extremely powerful and is clearly more effective than any of the therapeutic
approaches currently available in controlling virus replication.” Still , you
give your blessing to clinical trials of highly profitable toxins that
destroy PWAs’ already compromised immune systems.

Anthony Fauci, you are a liar because you have known for years that CD4
counts are a travesty of a surrogate marker that, through drug company
coercion, have been elevated to the status of “a standard.” Now that everyone
else knows it too, you and your corporate drug company cronies are urging
researchers to foist another useless marker, peripheral blood viral load
counts, on our frightened, desperate community. Peripheral blood viral load
fluctuates in blood circulation and offers virtually no indication of the
health or disease progression in HIV+ people. According to a recent article
in the April 1995 issue of Lancet concerning viral replication, “the
principle that virus suppression will produce a major clinical benefit must
remain an article of faith.” Information like that isn’t stopping doctors of
death like Marcus Conant from insisting that “patients should be treated
earlier with combination therapy, and we should be using markers such as PCR
and branched DNA to measure viral load as surrogate markers in clinical
trials.”

Your scheme isn’t too difficult to figure out; promote another invalid
surrogate marker that has no relation to health or life expectancy of PWAs;
develop a test that costs $200-$300 to measure this invalid marker; encourage
the creation of more deadly drugs that effect this invalid marker; and then
compare the pathetic results you get from these deadly drugs to the more
pathetic results you got from AZT and other nukes. In the eyes of the
government everybody wins. Companies that sell drugs and market tests get
rich and PWAs who sacrifice their bodies in your trials of death are
eliminated from the face of the earth.

The fact that your clinical trials aren’t meant to save our lives is no
secret. A December 1994 BETA article “A Remarkable Combination: AZT plus 3TC”
reports that the Phase II/III studies of these drugs were “designed to
evaluate the effect of the combination on laboratory markers of HIV disease
progression, such as viral load and CD4 counts, not critical endpoints, such
as opportunistic infections and survival.”

AIDS activists from ACT UP San Francisco and DNCB Now! have been screaming
for over a year that HIV+ people need to activate their cell mediated
immunity and raise their CD8 counts. These activists were invited to the NIH
to present a forum and share their knowledge and experience with researchers.
Finally some researchers are coming around and hearing our voices. Doctors
like Susan Buchbinder who in the August 1994 issue of AIDS stated that
“elevated levels of CD8 cells in healthy long-term HIV+ individuals suggest
that these cells play an important role in delaying disease progression.”

Because of your 1995 Annual Review of Immunology article we know that you
know this, Dr. Fauci, but still you prattle on about those CD4s that tell us
nothing at all.

Selling out: from “Murderer” to “Tony”

One thing that 10 years of the plague has taught us is how easily people and
organizations can be bought off. You are one of those people, Dr. Fauci.
Project Inform is one of those organizations. During this time of crisis you
are complacent; part of a government bureaucracy that values thriving
pharmaceutical company entrepreneurism over the health of people with HIV.

You are a pill-pushing pimp that cooperates with drug companies in forcing
dangerous concoctions down the throats of a desperate community that is
brainwashed into believing that taking a pill, any pill, will help them. AIDS
drugs are not sold to help people, they are sold to make a profit. The
situation is so out of control that drug companies now create and sell drugs
like Marinol, a synthetic derivative of the natural compound marijuana.

The conflict of interest, so apparent between you and the pharmaceutical
corporations, has now been embraced by those in the AIDS community who claim
that they are leaders. In their present state, organizations like Project
Inform, San Francisco AIDS Foundation, and ACT UP Golden Gate are all so
embroiled in conflict of interest that they must be viewed as enemies by
PWAs. Project Inform is still pushing AZT. San Francisco AIDS Foundation’s
BETA reads like a promo piece for Glaxo. And many of today’s so-called AIDS
activists are nothing more than public relations representatives whose job it
is to create a demand for the latest overpriced cure du jour. In the
meantime, grassroots efforts like the AIDS Cure Act are assailed by these
sellout AIDS organizations that have no desire to ever see a cure.

Ten years of hope? Fuck that. Try a decade of death and greed. Go back to
Washington you bastard.

This man is supposedly the “great specialist and healer,” who we’ve been told “cured AIDS” and was a celebrated hero?

Here are comments from folks online about the photo:

“Yet still as relevant today as it was back then…”

“Yet they still deny and remain blind. 17k died because of him.”

“Another very sad time in our history and it doesn’t surprise me that Fraudci was part of it.”

“And now the militant LGBTQ+ community members parrot the party line. Not all of us forget.”

If you really start searching Fauci’s past, especially with AIDS, you can see so many parallels between how he handled that and how he’s dealing with COVID.

Back then people accused Fauci of being a mouthpiece for Big Pharma… why would we think this leopard has changed his spots, now?