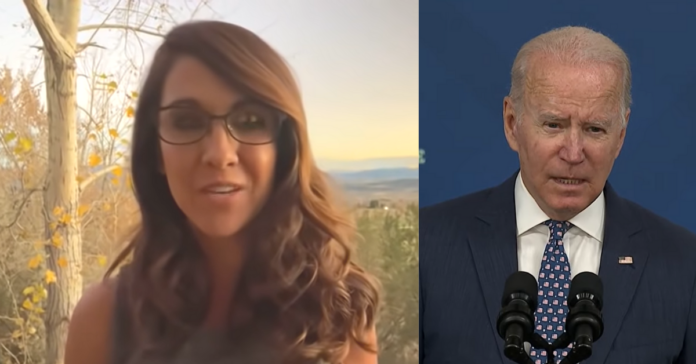 Rep. Lauren Boebert (R-CO) is introducing a bill to stop taxpayer dollars from being used to make settlement payments to illegal immigrants who sued the Trump administration for separating families at the border.

Boebert said: “In Biden’s America, it is better to be a criminal than a law enforcement officer. Border Patrol agents may be fired because of Biden’s vaccine mandate for federal employees, but illegal aliens get a free pass into our country and could receive a $450,000 check.

“For contrast, the highest-paid Border Patrol agents make less than half that in yearly salary after 20 years of service. I’ve had enough of the Biden regime’s madness, so I introduced the We’re Not Paying You to Break Our Laws Act to restore sanity and the rule of law. We should be putting Americans first, not criminals!”

Rep. Lauren Boebert introduced the We’re Not Paying You to Break Our Laws Act to prohibit settlement payments to illegal aliens of any amount as part of litigation filed by criminals suing the federal government.

Background: The Wall Street Journal reported that the Biden regime is planning to pay criminal illegal aliens $450,000 as a reward for breaking the law and being separated from family members at the border by the previous administration.

The disgraced ACLU is involved in litigation suing the federal government on behalf of criminals apprehended during the Trump Administration. The total payout to settle this frivolous lawsuit may amount to $1 billion or more.

Rep. Boebert’s We’re Not Paying You to Break Our Laws Act stops the Biden regime’s plans to settle this ridiculous lawsuit and bans payments from going to criminals frivolously suing the federal government.

When asked about his administration’s plans to pay criminals $450,000, Biden dismissed the reporting by saying that the payments won’t happen.

Shockingly, Biden’s Deputy Press Secretary overruled him and said that the Biden regime is hoping to give payments to illegal aliens.

The We’re Not Paying You to Break Our Laws Act provides clarity to the White House’s convoluted cover-up.

While the White House won’t give a clear answer about settlement payments, Rep. Boebert’s legislation leaves no room for doubt: illegal aliens will not be getting taxpayer money.

Pay $450,000 of USA taxpayer $$$ to each illegal immigrant separated at the border? No way!https://t.co/oEETnFCcRh

Biden is opening the strategic oil reserves because he decided to destroy domestic energy production and OPEC rebuffed his nonsensical demands.

He’s only releasing enough for about 2.5 days of usage.

This “help” is a big lie. He made the crisis!