A horrific scene unfolded in Waukesha, Wisconsin when a van plowed into a Christmas parade filled with people.

CNN reported that a treasured rite of the holiday season turned into a scene of bloody, violent mayhem late Sunday afternoon as a vehicle plowed into the Waukesha Christmas Parade, leaving more than 20 people injured, including children, and shaking the community, authorities said.

There were some fatalities but a figure was not released as authorities sought to notify families.

Eleven adults and 12 children were ferried to local hospitals.

Waukesha Police Chief Dan Thompson said that around 4:39 p.m. a red SUV drove into the Christmas Parade “and more than 20 people were injured as a result of this incident.”

A suspect vehicle was recovered and a “person of interest” was in custody, the police chief said. People were transported to hospitals via ambulances and police vehicles, he added.

We don’t have a motive yet, but as you can imagine, rumors are flying that this could have been a domestic terror attack. Some are even wondering it could be “retaliation” for the not guilty verdict in the Kyle Rittenhouse trial.

But again, this is speculation from worried people. You can’t blame them.

However, what is disturbing, are the responses from folks on the left.

As with any type of tragedy, you always get the trolls who come out and say disgusting things, but when you see the CEO of a company do it, it causes quite a stir.

A man by the name of Mark L. Feinberg, who is the CEO of an online merchandise store called OTHRStore has caused an uproar online with his comments about the attack.

Forbes actually did a write-up on Mr. Feinberg after he started the OTHRstore. The piece portrayed Mr. Feinberg as a professional businessman who was seeking to help smaller, lesser-known brands.

However, his behavior on Twitter regarding this horrific and deadly incident has many people shocked and disgusted and wondering what kind of “helpful person” would behave this way.

It all started when Mr. Feinberg responded to a tweet from former WI Governor Scott Walker, who offered his thoughts and prayers for the victims.

Mr. Feinberg’s response was cold and sarcastic. He suggested the drivers of the van could have been “defending” themselves against the crowd.

Mind you, people have died, we just don’t know how many yet, and the CEO of a company is saying stuff like this online. It’s disturbing

Here’s what Scott Walker said: Prayers for all involved in Waukesha. That is my mother’s neighborhood and we are all very concerned with what happened there today.

And Mr. Feinberg’s response was: “Perhaps it was self defense from the crowds @ScottWalker– don’t two sides this thing.”

Perhaps it was self defense from the crowds @ScottWalker – don’t two sides this thing.

But Mark didn’t leave it at that, unfortunately.

He made another insensitive comment regarding the deadly incident.

When he was told by another Twitter user that it was a Christmas Parade, Mark’s response appeared to be “sociopathic.”

This set off a Twitter outrage storm. Here are some comments from folks online:

“Please stop. Not necessary and not helping.”

“Making light of grandmothers and young girls getting plowed down at a Christmas parade is an interesting take—for a sociopath!”

“My god, what is the matter with you?”

“I’m sure those small businesses you claim to support will be happy with your soon to be new fame.”

“What is wrong with you?!! I disagree with the verdict myself but this is horrible.”

“U are about to be famous mark”

“How far do you think you can push people? You’re a disgrace.”

“You claim to help companies, but mock dead people like this? You’re SICK”

“Mark, I didn’t agree with the verdict, but this is disgusting. You’re supposed to be a businessman, act like it”

Mr. Feinberg supporting a terrorist attack on a Christmas parade. Somehow trying to equate this to Kyle defending himself from being attacked.

It is important for our people to understand that these are evil people. https://t.co/6BCgwzhJtp 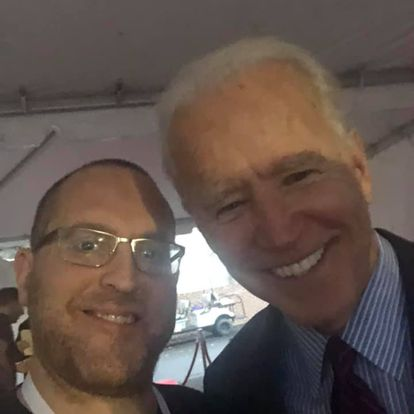 A good life lesson to take away from this is: nobody should allow politics to turn them into a monster.

If you do that, you actually become the thing you claim to hate the most.

[VIDEO] Is Pressure Getting to Him?