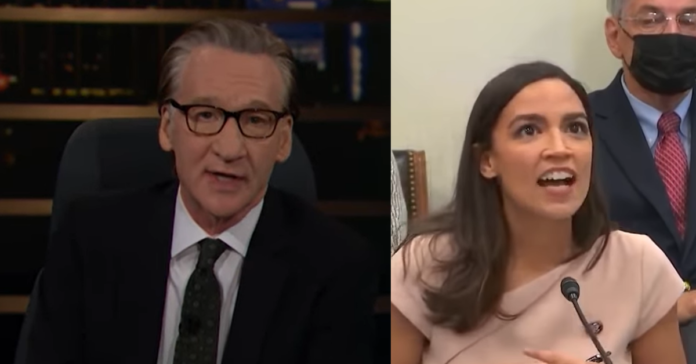 Hollywood comedian Bill Maher challenged Rep. Alexandria Ocasio-Cortez, D-N.Y., to appear on his show as he berated the Dem Party for suffering crushing defeats in the November elections. Bill said it seems the Dems new campaign slogan is “vote Democrat because white people suck,” before noting that 62% of Americans think the Dem party is “out of touch.” He said,

“In plain English, nobody likes a snob. Your micro aggression culture doesn’t play in the Rust Belt. If a staffer hands you a speech that says ‘menstruating people’ instead of women, don’t say that, say women.”

Maher offered to point the Dem Party in the “right direction” heading into the midterm elections. He said James Carville blamed the Dem losses on “stupid wokeness,” to which AOC shot back “almost exclusively used by older people these days so that should tell you all you need to know.”

Maher said: “You’re alienating a whole lot of people, particularly whites without a college degree, which is most of them in a country that is still 70% white.

“What? This is a term folks like you brought out very recently, had been proudly displaying it every march since.

“Just last year, the Guardian declared ‘woke’ the ‘word of our era.’ I guess they didn’t get the memo from the ‘Mean Girls Club.

“What a great strategy, never missing an opportunity to remind voters how lame and clueless and hopelessly uncool they are, especially since those are the ones who actually vote.

“What word would you like us to use for the plainly insane excesses of the left that are not liberalism but something completely different?

“Because you can’t have that word ‘liberal’ from us and think it should cover things like canceling Lincoln and teaching third-graders they’re oppressors.

“If the word only made you think of rational, deserved causes like teaching a less whitewashed version of American history, AOC would still want to own it.

“But it’s a joke because it makes you think of people who wake up offended and take orders from Twitter. And their oversensitivity has grown tiresome.

“But that will probably never happen because Democrats don’t go anywhere these days where they’re not being pre-adored.”

Maher then invited AOC on his show:

“And that’s my last bit of advice to them: Go where the ‘amen corner’ isn’t. Do Fox News. Be brave. Come here. Go everywhere.

“Winning is about expanding the electorate.”

Why are @TheDemocrats who support so many issues that benefit the middle class still considered “out of touch” by 62% of America? #DemIntervention #Midterms2022 #WokeIsAJoke pic.twitter.com/87U2n81m0d

Rose McGowan's Powerful Tweet - 'Do You Understand' The Distraction They're Trying To Pull?