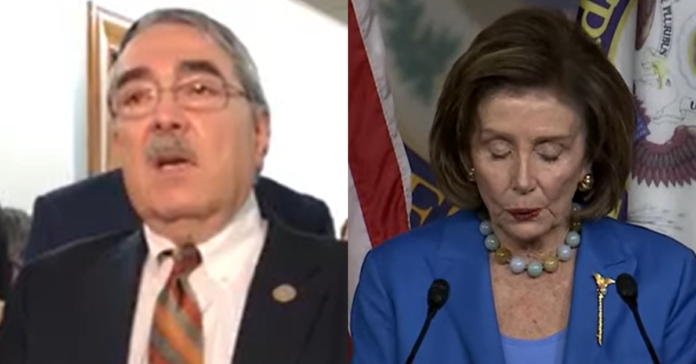 The Dems are dropping like flies in a terrible sign for the lame duck Nancy Pelosi. With redistricting maps drawn, the GOP already picked up enough seats to fire Pelosi and put McCarthy in her sport.

Numerous Dems in the House have announced they will not run again with some in safe seats. Those don’t want to be in the powerless minority. And the big shoe has yet to drop because many believe Nancy Pelosi will not run.

The latest Dem to bow out is from North Carolina. U.S. Rep. G.K. Butterfield plans to announce his retirement today according to multiple media Butterfield is a 74-year-old Democrat from Wilson. He has been a civil rights advocate, a judge, and since 2004 a congressman representing Eastern North Carolina.

Butterfield would be the second North Carolina Democrat to retire recently. Rep. David Price of Chapel Hill already said he was out.

Butterfield is the former chairman of the Congressional Black Caucus. He serves as senior chief deputy whip of the House Democratic Caucus, the powerful position once held by John Lewis. He serves in North Carolina’s 1st Congressional District.

But after redistricting, Butterfield would be facing Republican Sandy Smith in a new district that favored the GOP.

In a tweet, Smith said, “I won my primary by 77% of the vote last cycle. Pretty decisive. In the general election, I overperformed many before me. Just sayin’.”

Lawmakers were required to redraw the districts this year after the release of Census numbers that earned North Carolina an additional 14th congressional district. The map handily gives Republicans eight districts and Democrats three. It also includes two districts whose voters tend to lean slightly to the right.

But Butterfield’s hometown was placed into the 2nd Congressional District, which lawmakers drew with just a slight lean to the left, making it an easy district for Republicans to flip. Several lawsuits accusing lawmakers of gerrymandering the maps have already been filed.

Earlier this month, the National Republican Campaign Committee added Butterfield to its list of seats it will target to flip to GOP control. The NRCC also lists Wake County Democratic Rep. Deborah Ross as another Democrat they consider vulnerable in the 2022 elections.

Butterfield, from Wilson, is serving his ninth term in the U.S. House of Representatives.

Will Nancy Pelosi be making her announcement soon also? https://t.co/jwGecehi0v via @BreitbartNews

BREAKING: I’m told by multiple NC/Capitol Hill sources that @GKButterfield will announce his retirement from Congress and he has informed @SpeakerPelosi.

Butterfield’s office won’t confirm or deny but says “the official announcement will be made later today or tomorrow.” #ncpol