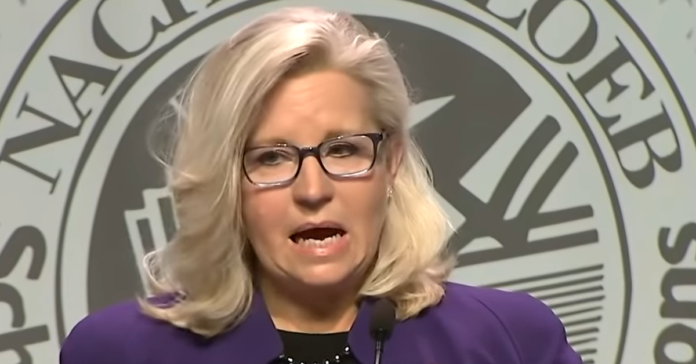 The Wyoming Republican Party just turned up the heat on Liz Cheney and issued its second rebuke. In February, the Wyoming GOP central committee voted to censure Cheney. Saturday they voted to no longer recognize her as a member of the GOP.

The move to denounce Cheney passed by 31-29 vote Saturday in Buffalo, Wyoming. Around one-third of Wyoming’s 23 counties voted earlier to no longer recognize Cheney as a Republican.

“It’s laughable to suggest Liz is anything but a committed conservative Republican. She is bound by her oath to the Constitution, Jeremy Adler, a Cheney spokesman, said.

“Sadly, a portion of the Wyoming GOP leadership has abandoned that fundamental principle, and instead allowed themselves to be held hostage to the lies of a dangerous and irrational man,” he added.

“Liz Cheney stopped recognizing what Wyomingites care about a long time ago. When she launched her war against President Trump, she completely broke with where we are as a state.”

The decision by the Wyoming Republican Party to no longer recognize Rep. Liz Cheney as a GOP member has spurred a strong reaction among some conservatives.

The 31-29 vote by Wyoming’s GOP central committee over her Republican membership came after votes by GOP officials in around one-third of the state’s 23 counties, the Associated Press reported.

She has long been the focus of Republican ire since she voted for the impeachment of former President Donald Trump over the riot at the U.S. Capitol.

In February, the Wyoming GOP committee voted to censure her and in May was ousted as the No. 3 Republican in the House.

She is a conservative Republican in every traditional respect. But she will not lie for Trump — which is why she’s persona non grata in the GOP. “The Republican Party is more than Trump!” some people say, with annoyance. Oh? Not by the evidence. https://t.co/NVIOZOvufb

Tom Cotton Cuts To Chase: “Biden has surrounded himself with a team of incompetents”