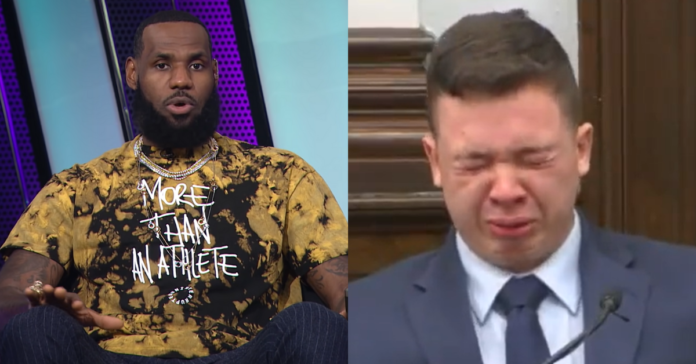 The left has not watched the Kyle Rittenhouse trial and the media is doing them a disservice with its reporting because half this country thinks Kyle is guilty and will be furious when he is acquitted.

And if you have actually watched the trial, not just read media accounts, you know Kyle is looking very good right now.

No one knows what a jury will do but the prosecution’s star witness admitted he pointed a gun at Kyle before Kyle shot him and the judge yesterday almost declared a mistrial because of bad behavior by the prosecution. Kyle also did very well on the stand yesterday in what all considered a risky move by the defense.

But LeBron, brainwashed by the terrible media coverage, not only thinks Kyle will be convicted but he thought it wise to mock a young kid looking at spending the rest of his life in prison.

Who would do that?

James shared the video of Kyle Rittenhouse breaking down on the stand with this caption:

“What tears????? I didn’t see one. Man knock it off! That boy ate some lemon heads before walking into court.”

Of course, LeBron James, who has a notorious reputation for poor sportsmanship, has gotten himself into a series of tangles on Twitter in the past, such as when he publicly threatened a white police officer who lawfully shot a black teenage girl to defend another black teenage girl from being stabbed.

“You’re next” he screeched as he shared the innocent officer’s photograph all over social media. James later deleted the tweet.

Prior to that, LeBron accused Houston Rockets GM Daryl Morey of being uneducated about the situation in Hong Kong when he angered the communist government of China by publicly supporting the Hong Kong protesters in 2019.

“We all talk about this freedom of speech, yes, we all do have freedom of speech but at times there are ramifications for the negative that can happen when you’re not thinking about others and you’re only thinking about yourself,” James told reporters. “I don’t want to get into a … feud with Daryl Morey, but I believe he wasn’t educated on the situation at hand and he spoke. So many people could have been harmed, not only financially, but physically, emotionally, and spiritually.”

What tears????? I didn’t see one. Man knock it off! That boy ate some lemon heads before walking into court. 🤣🤣🤣 https://t.co/LKwYssIUmD

NOW – Judge in Rittenhouse trial screams at the prosecutor. pic.twitter.com/UBxDTwVIoT

“The problem is this is a grave constitutional violation” — Judge Bruce E. Schroeder pic.twitter.com/fzu7vJ0Xu7

Crew Member Sues Alec Baldwin For Negligence: ”Attempted to save money by hiring an insufficient number of crew members to safely handle the props and firearms"