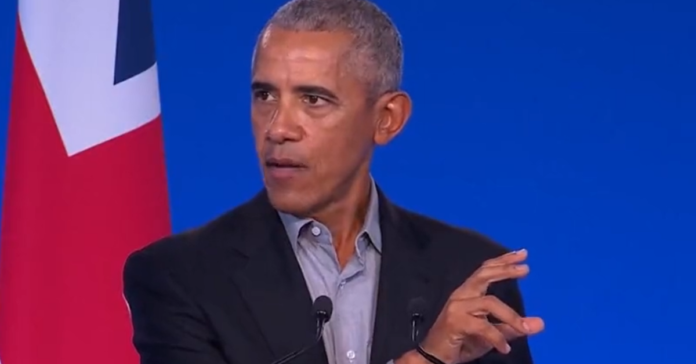 Former President Barack Obama pulled a Joe Biden and made an international flub while delivering a speech at COP26. Obama mixed up Scotland and Ireland while speaking in Glasgow on Monday and he also flubbed a literary reference.

“Since we’re in the Emerald Isles here, let me quote the bard, William Shakespeare,” Obama said. “‘What wound,’ he writes, ‘did ever heal but by degrees.’”

‘Emerald Isle’ refers to Ireland Obama’s critics pointed out on social media, not Scotland or other countries in the United Kingdom. He also botched the literary reference as Shakespeare is England’s national bard, not Scotland’s. Robert Burns has that honor.

Obama took a few swipes at Trump saying: “Of course some of our progress stalled when my successor decided to unilaterally pull out of the Paris agreement in his first year in office. I wasn’t real happy about that.

“Have been constrained in large part by the fact that one of our two major parties has decided not only to sit on the sidelines, but express active hostility toward climate science, and make climate change a partisan issue.

“Vote like your life depends on it, because it does. When it comes to climate, time really is running out, we are nowhere near where we need to be.

“There are times where I am doubtful that humanity can get its act together before it’s too late. We can’t afford hopelessness. It will set the United States on course to meet its new climate targets.”

He also used his speech to reference English playwright William Shakespeare which was also to the shock of many Scots who tuned in. They regard Robert Burns as their Bard.

During his near 45-minute speech, the 60-year-old quoted from Othello.

Obama said: ‘Since we’re here in the Emerald Isles, let me quote the bard. What wound did ever heal but by degrees?

‘Our planet has been wounded by our actions – those wounds won’t be healed today, or tomorrow, or the next, but they can be healed by degrees.’

‘If we start with that spirit and each of us can fight through the occasional frustration and dread, if we pledge to do our part and then follow through on those commitments, I believe we can secure a better future. We have to.

‘And what a profound and noble task to set for ourselves.

Barack Obama mistakes Scotland for Ireland and calls it ‘Emerald Isle’ at COP26https://t.co/tjh4yHFdzj

Bye-Bye to the “Buy American” Rules, Thanks to Fake Infrastructure Bill