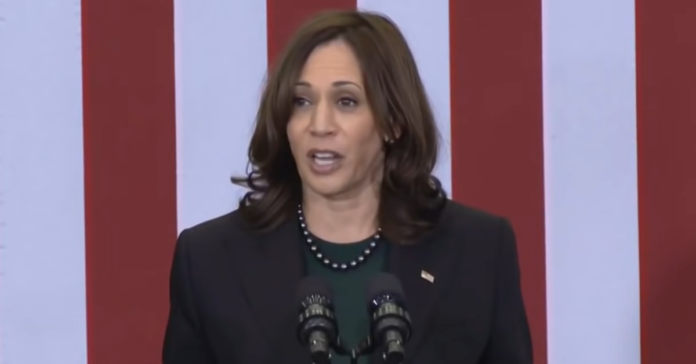 Vice President Kamala Harris got some career ending news from a new poll that showed only 28% of Americans approve of the job she is doing. With the poll also showing that 64% of Americans, including nearly 30% of Dems, do not want Joe Biden to run again the big loser is clear, Kamala Harris.

With numbers this low, she can expect numerous challengers in 2024 if Biden does what most expect and decides not to run.

Nancy Pelosi also got the kind of news that makes her a lame duck. If today was election day, people would vote for their Republican congressional candidate over the Democratic one by 46%-38%. This is the generic ballot poll question that keeps Pelosi up at night.

As for President Joe Biden, he is above Kamala but that is all the good news he can take from the poll that shows his approval rating at 38%.

Nearly two-thirds of Americans, 64%, say they don’t want Biden to run for a second term in 2024. That includes 28% of Democrats. Opposition to Trump running for another term in 2024 stands  at 58%, including 24% of Republicans.

Vice President Kamala Harris’ approval rating is 28% – even worse than Biden’s. The poll shows that 51% disapprove of the job she’s doing. One in 5, 21%, are undecided.

Americans overwhelmingly support the infrastructure bill Biden is about to sign, but they are split on the more expensive and further-reaching “Build Back Better” act being debated in Congress. Only 1 in 4 say the bill’s provisions would help them and their families.

Two-thirds of Americans (66%) say the country has gotten on the wrong track; one in five (20%) say it is headed in the right direction.

Kamala Harris has gone down to a 28% approval rating.

How much lower can she go?

She’s going down with the Titanic.

Sky News host @RitaPanahi says Kamala Harris would be a threat to Joe Biden right now if she was “even remotely half-competent”.https://t.co/JN2zXesdoQ

Report: Jen Psaki Hasn’t Been Seen in Public for Over A Week Since Revealing She Had Covid

Attacker Stabbed Security in the Neck With Needle, Possibly Injected Others – Report