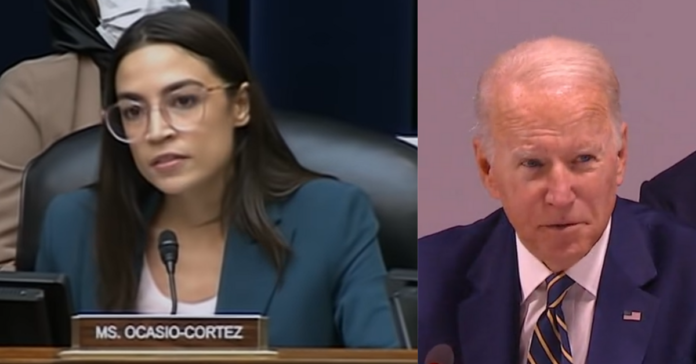 President Joe Biden went to the House and all but begged the Dems to get it together and pass his big infrastructure bill after months of failure and a visible backlash against the Dems across the nation.

It took a while but the House eventually passed the $1 trillion infrastructure package by a 228-206 vote late Friday. But even when the Dems get a win they lose as the bill only passed because 13 Republicans crossed the aisle to give Biden and Pelosi the votes.

Why would the Dems need GOP votes to pass Biden’s signature legislation? Because AOC and other progressives snubbed Joe and voted against the bill.

“Generations from now, people will look back and know this is when America won the economic competition for the 21st Century,” Biden said in a written statement.

The 13 GOP votes gave Speaker Nancy Pelosi the numbers to pass the bill despite no-votes from six liberal Democrats who held out trying to secure a bigger version of the companion Build Back Better social spending package.

They included a combination of lawmakers who are retiring and who will seek re-election. Some did — but most didn’t — vote to impeach former President Trump over the Jan. 6 insurrection.

What they’re saying: “I weakened their hand. They have n0 leverage now,” said Rep. Nicole Malliotakis (R-N.Y.), who had shaped a GOP-friendly spin on her vote by the time she exited the chamber: “I voted against AOC and the squad tonight.”

Malliotakis told Axios that progressives will no longer be able to hold the bill hostage and predicted Build Back Better will be “drastically weakened” in the Senate or “die altogether” as a result of the infrastructure bill passing.

A damned-if-you-do, damned-if-you-don’t choice is what Rep. Don Bacon (R-Neb.) told Axios he faced, so he said he did what felt right. “You vote one way, maybe it hurts in the primary. You vote the other way… in my district, it’d hurt me in the general.”