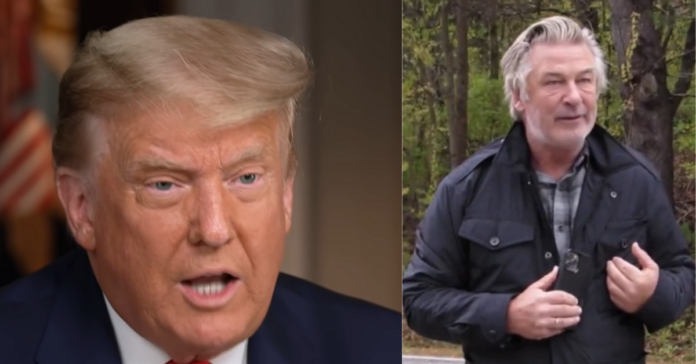 Former President Donald Trump broke his silence on the Alec Bladwin shooting calling Alec a ‘troubled guy’ before adding in his opinion Baldwin had something to do with it or was somehow negligent. Alec has not been accused of any crime although as a producer on the film he may face civil action.

Trump said to Chris Stigall: “He’s a troubled guy, There’s something wrong with him. I’ve watched him for years. He gets into fistfights with reporters. Look, I don’t like reporters, I like some, some are great, some are talented, but you don’t get into fistfights.

“I mean, everything he does, he’s a volatile guy. He’s a nutjob. If they handed me a gun, I would never point it at somebody and shoot it, you know. I don’t care about checking the gun, you know, you can look at it any which way, you know, you’ve been reading the same articles that I have and seeing what I’ve been seeing.

“It’s weird, it’s not doable, and then they’re outside, I think just by natural.

“You know, they’re outside in this big open space, there’s nobody around, I think I would have pointed it up in the air, but you can also look to see if it’s loaded.

“But who would take a gun and point it at a cinematographer and pull the trigger, and she’s dead.

“I can’t imagine anybody, as bad as it may have been kept, meaning, you know, the people who take care of the equipment and the guns and everything else, but even if it was loaded, and, you know, that’s a weird thing, maybe he loaded it.

“So there’s something wrong with him, he’s a sick guy.

“I’ve watched him, and he’s a cuckoo bird, he’s a nutjob, and usually when there’s somebody like that, you know, he, in my opinion, he had something to do with it, but if nothing else, how do you take a gun, whether it’s loaded or not loaded, how do you take a gun, point it at somebody that’s not even in the movie, and just point it at this person and pull the trigger, and now she’s dead.

“But he was terrible, but they had him on for years doing this stuff. But I don’t like him or dislike him, I don’t actually know him, but I’ve watched him over the years because of the fact that he did this so much on ‘Saturday Night Live.”

Alec Baldwin speaks out on the fatal shooting of cinematographer Halyna Hutchins on the set of RUST:

“She was my friend … We were a very, very well-oiled crew shooting a film together, and then this horrible event happened.” pic.twitter.com/QzVISWk8Qy