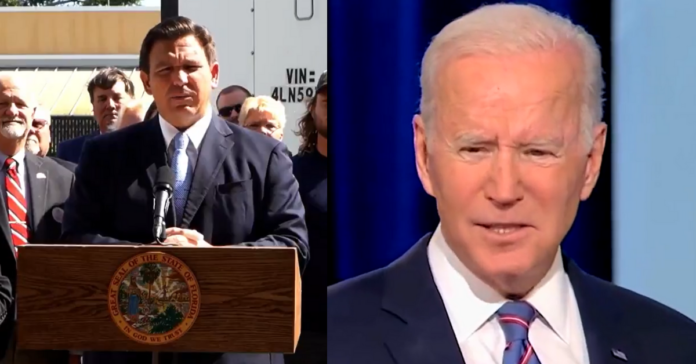 Florida Governor Ron DeSantis issued a warning to president Joe Biden and the knuckleheads in his administration who are considering handing out $450,000 payments to illegal immigrants who were separated from their families at the southern border under the Trump administration.

DeSantis said he is “very, very concerned” about the potential payments because ordinary Americans are struggling with rising costs before calling the idea a “slap in the face to every hard-working American.”

Ron said: “You’ve had all kinds of really bad policies throughout our country that has limited freedom. And you’re going to turn around for that and you’re going to do $475,000 for an individual that came illegally to this country?

“I’ve seen a lot in my day, I’ve seen a lot that’s happened over the last nine or ten months that I didn’t think I’d ever see, but this takes the cake.

“If that is done, that is going to be a slap in the face to every American who works hard and plays by the rules.”

“And it will especially a slap in the face to people that have immigrated legally to this country. “That should not be allowed to stand.

“It’s wrong, and whatever we can do in Florida to fight back against it, we will do,” he said.

“Promising tens of thousands of dollars to those who unlawfully entered the United States would not only reward criminal behavior, but it would surely send a message to the world that our borders are open and our rule of law will not be enforced,” the letter said.

Fox News’ Joe Concha said: “Wall Street Journal says that they’re thinking of paying those who broke the law, I should say, entered the country illegally $450,000. If that isn’t a caravan incentive program, I’m not sure what is.

“Sneak across the border with children and get placed in the richest 1 percent.

“Meanwhile, if you live in this country legally, Stuart and you serve in the military and you get killed in action, you somehow get less money.

“In my state of New Jersey the average per capita income is about $42000, or one-tenth of what these migrant families might get paid.

“I just find this appalling, and I can’t believe that we’re even discussing such a proposal in this situation, considering everything else that was just laid out.”

Paying illegal immigrants hundreds of millions of taxpayer dollars for “damages” is a slap in the face to hardworking Americans and individuals who legally immigrated to our country. pic.twitter.com/GxusWKLL6c