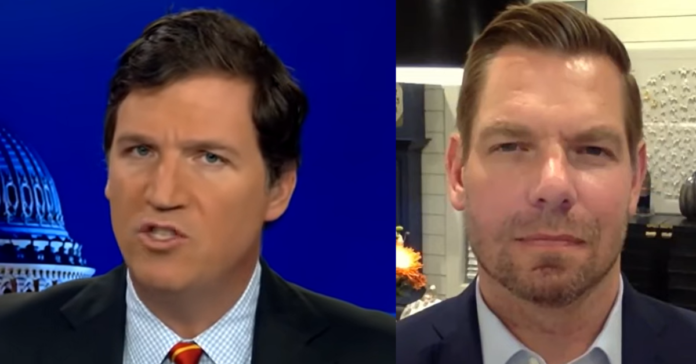 Tucker Carlson dropped the hammer on Eric Swalwell after the Dem Rep got duped by a cheap political stunt in the critical Virginia election. Tucker said: “It’s not a partisan point to note that whatever else he might be, Eric Swalwell is legitimately stupid.

“Some of his colleagues have compared him to a labrador with a head injury, but that doesn’t seem quite fair. There is literally no chance Eric Swalwell could ever find a tennis ball. He can barely remember to breathe.

“Our enemies know just how dumb Eric Swalwell is and they’ve exploited it. If you’re a marginally attractive Chinese spy for example hoping to commit bizarre sex acts with an American politician in order to steal this country’s secrets, sooner or later you would wind up at Swalwell’s place, because it’s just too easy.

“So this morning, Swalwell was staring at the internet, as he often is, when he saw the picture of those fake Nazis in front of Glenn Youngkin’s campaign bus in Virginia and here’s the amazing part, a normal person, someone with an IQ over 70 might have paused for a moment and wondered, ‘That’s funny, what’s a black guy doing holding a torch at a white supremacy event, that seems weird.

“But that didn’t occur to Eric Swalwell, he didn’t wonder about it, it didn’t seem weird to him, it all seemed perfectly normal.

“So as he is paid to do, Swalwell emitted a small cloud of simulated outrage and then went back to looking at websites of sorority girls. That’s his life.”

The Lincoln Project said it sent people with tiki torches to a campaign event held by Virginia GOP gubernatorial candidate Glenn Youngkin on Friday, sparking backlash against the activist group.

The anti-Trump group issued a statement saying it pulled the stunt in Charlottesville because Youngkin has not condemned the 2017 “Unite the Right” white nationalist rally.

“Today’s demonstration was our way of reminding Virginians what happened in Charlottesville four years ago, the Republican Party’s embrace of those values, and Glenn Youngkin’s failure to condemn it,” the statement said.

“If he will denounce Trump’s assertion that the Charlottesville rioters possessed ‘very fine’ qualities, we’ll withdraw the tiki torches,” the group continued. “Until then, we’ll be back.”

It’s not surprising that @ericswalwell fell for today’s hoax. He’s not a very bright human being pic.twitter.com/a0QaxRPNlr

Democratic Party operatives, MSNBC analysts, and their Lincoln Project allies got caught perpetrating a deliberate fraud today, all with racism and racist discourse as their plaything. None will suffer any career consequences because their circles are happy they did this.