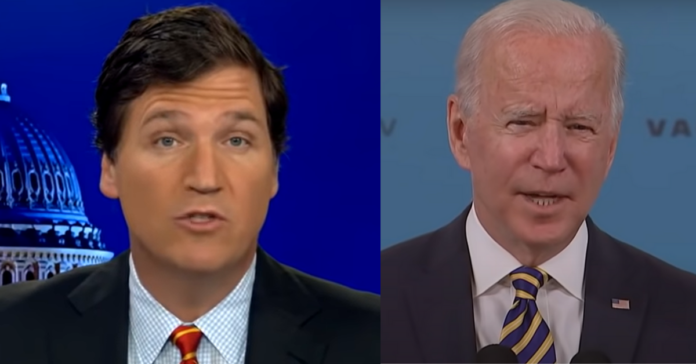 “It’s a disaster and it’s hard to believe as you watch that tape that not so long ago, this country actually enforced its immigration laws. Not long ago at all, in fact, just two years ago, in August of 2019, Federal agents kicked down the doors of seven separate chicken plants in Central Mississippi. They arrested hundreds of foreign nationals who were living and working there in violation of American law. Several executives of the poultry plant were later indicted. Among the charges brought, child labor.

So our decadent corporate press essentially ignored this except to portray the raids as heartless and barbaric. Not surprisingly, a trade group called the National Chicken Council agreed with that characterization. How dare the government enforce its own laws?

What’s interesting is that people who actually live in Central Mississippi had a very different view of what happened. They’d spent years watching helplessly as foreign workers lowered the wages for people who were actually born there. They understood immigration as most wage earners do understand immigration, primarily as an economic question.

When you flood the labor pool, wages go down. That’s called supply and demand. Once the illegal workers were gone, those chicken plants were forced to hire American citizens. In this case, many of them were African- American.

So you’d think maybe the Biden administration, with its much repeated commitment to equity, would think this is good, but of course they didn’t care. They are not interested in helping working-class people of any color. Diversity consultants, Princeton professors, MSNBC contributors, transhumanist tech billionaires, of course, those are their people. That’s their main constituency.

But blue collar high school graduates who just want a decent hourly job? No. No chance. Not interested.

So the administration promptly shut down all workplace immigration raids. Now employers who hire illegal aliens in order to undercut American wages have the full protection of the Department of Homeland Security, because it’s not a corporate conspiracy or anything. Don’t you worry.

Now, the rest of the world is fully aware of this. They follow these developments, they have the internet, too. As a result, as you just heard Bill Melugin say, a massive migrant caravan has formed in Southeastern Mexico, in the City of Tapachula.

So why are they coming? We don’t need to guess about that, ask the people who are coming here illegally. They’re not embarrassed to articulate it at all. They are coming because they know immigration enforcement under Joe Biden has been suspended in the United States.

The White House hasn’t simply ended workplace raids, they’ve also stopped turning people away at the border, so people just come in and they know they’ll never be forced to leave. Already, the administration has released more than 160,000 illegal migrants into the country with no supervision whatsoever, without telling the people into whose neighborhoods they’re moving, because they don’t care what American citizens think.

By the way, how many are vaccinated? You can’t go to events, you can’t have a job in this country without being vaccinated, but if you come here illegally, no problem. What does that tell you?

Now, tens of thousands of those migrants according to documents obtained by Fox News have already received work permits. Right. Soon they will receive free benefits and the healthcare that Joe Biden has promised them. That’s why they’re coming. Again just ask them and they’ll tell you.

Oh, except around my vacation house in Delaware, hypocrite. But it’s more than hypocritical, it’s criminal, and not in a rhetorical sense. Joe Biden is actively and intentionally breaking federal law even as he works to protect himself and his own family from the consequences of these lunatic policies.

Presidents have been impeached for less than that. In fact, no American President, however, has been impeached not Andrew Johnson, not Richard Nixon, not Bill Clinton, not even Donald Trump has ever even been accused of crimes this flagrant or this serious, not even close.

According to new court documents, between January 20 and the end of March, just for example, the Biden administration refused to take custody of 37 illegal immigrants in the State of Texas. Many of these people had additional criminal records.

According to an affidavit from a Texas Sheriff, the administration refused to detain even suspects believed to have committed aggravated sexual assault and narcotics violations at the height of a drug epidemic that’s killing almost 100,000 Americans every year.

So it’s really clear, this is not simply an incredibly dangerous and destructive policy that intentionally hurts America and it is that, no, it’s more though. It is an unequivocal violation of Federal statute. It is, in other words, a crime. It’s a crime.

In other words, for the safety of American citizens, of course, and every country has laws like this, the U.S. government is required to arrest and hold criminal aliens and deport them, but Joe Biden has refused to do that. He is breaking the law right out in the open.

So why hasn’t he been impeached? Not because he has bad character or he is senile, but because he is breaking Federal law. Not long ago Joe Biden would have been impeached for that. Even Democrats understood not so long ago that immigration law is fundamental to any country.”

Trump Gives Details About Future Of New Media Company: “The new age of censorship is a disaster for our country, the more I looked into this problem, the more I realized that to restore free speech, a major new platform would have to enter the market”