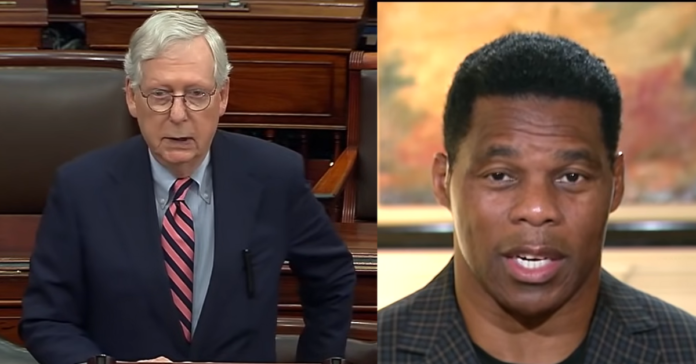 Senate Republican Leader Mitch McConnell endorsed former NFL star Herschel Walker for a U.S. Senate seat in Georgia in a must-win race for both the Dem Party and the GOP.

This is significant because Mitch has been pushing his own slate of candidates while Trump is backing others in certain races so Mitch’s endorsement of Trump’s pick should help Walker clear the field and have full party support in the general election.

“I am happy to endorse Herschel Walker for U.S. Senate in Georgia,” McConnell said. “Herschel is the only one who can unite the party, defeat Senator Warnock, and help us take back the Senate.”

“I look forward to working with Herschel in Washington to get the job done,” he added.

Ralph Warnock will not go down easily. He raised $9 million in the third quarter of this year and has around $17.2 million.

As Republicans aim to win back the Senate majority they lost in January when the Democrats narrowly swept Georgia’s twin Senate runoff elections, they’re playing plenty of defense, defending 20 of the 34 seats up for grabs, including five open seats – with two of them in the crucial battlegrounds of Pennsylvania and North Carolina.

But they also see opportunities to flip blue seats red in four states, including Georgia. And they view Warnock as one of the most vulnerable Democrats running for reelection in 2022.

Warnock defeated Republican Sen. Kelly Loeffler, who was appointed by GOP Gov. Brian Kemp, by a razor-thin margin on Jan. 5, to serve the final two years of the term of former GOP Sen. Johnny Isakson, who resigned in 2019 due to health reasons.

Thank you Leader McConnell for your endorsement. As I have said from the beginning, I am laser focused on bringing people together to win this seat back for GEORGIA and for America. #UnitedWeStand #DividedWeFall pic.twitter.com/0wJiuxss3W

Nigerian man interviewed by Fox says he joined the migrant caravan because Biden "is going to help us."