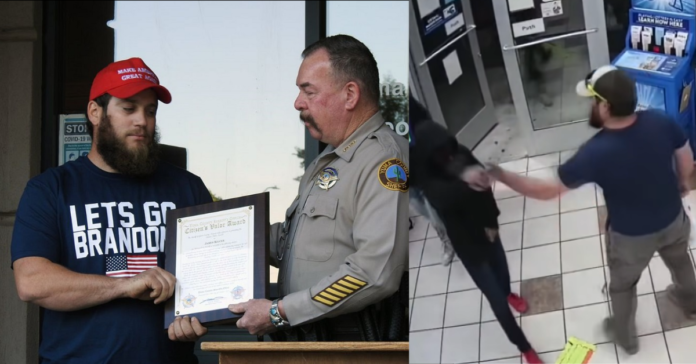 On Tuesday, October 26, 2021, the Yuma County Sheriff’s Office gave an award to Retired U.S. Marine James Kilcer who went viral after he stepped in to stop a robbery by disarming the suspect.

Surveillance video captured the event and Kilcer’e heroism quickly went viral. The video you can see below shows Kilcer taking the gun from an armed man at considerable risk to himself to stop the robbery.

Two suspects fled after he took the gun, but Kilcer was able to keep the other one there until the police arrived and made the arrest.

Yuma County Sheriff Leon Wilmot gave Kilcer the YCSO Citizen’s Valor Award. Wilmot said he gave him the award, “for extraordinary heroism and exceptional courage while voluntarily coming to the aid of another citizen during an incident involving criminal activity at extreme, life threatening, personal risk in an attempt to save or protect human life.”

Last week, Kilcer told “America’s Newsroom” he takes his personal safety, and the safety of others, “very seriously.”

“I turn around to go and leave, kind of walk out and as I’m turning around I hear the door kind of open real aggressively,” Kilcer said about the incident. “At that point, the ‘spidey senses’ tingled a little bit.”

Three unidentified people entered the store with one armed frontman leading the way.

“I saw two other guys with no other weapons and decided that’s the guy that I’m going to hit,” Kilcer said

“I was actually going to take control of his head and the gun at the same time, and the bag just happened to be heavy and attached to me and it smashed him right in the face,” Kelcer said.

From The Arizona Daily Independent:

According to the Sheriff’s Office, on Wednesday, October 20, 2021, at approximately 4:30 a.m., deputies responded to an armed robbery report at the Chevron located at 10747 S. Fortuna Road.

Upon arrival, deputies learned that three suspects entered the Chevron, one of them armed with a handgun.

As the armed suspect walked by Kilcer while pointing the weapon at the cashier, Kilcer reacted without hesitation, quickly disarming the suspect and taking him to the ground.

He was able to immediately gain control of the gun and detain the suspect until Deputies arrived.

As a result, no victims were injured and no property loss was sustained.

Old Tweet from Hillary Clinton Resurfaces, And It Reminds Everyone Why She Wasn't Elected

Trump issues statement on "Caravan pouring through Mexico" says "Just nine months ago, we had the strongest Border in our Nation’s history"