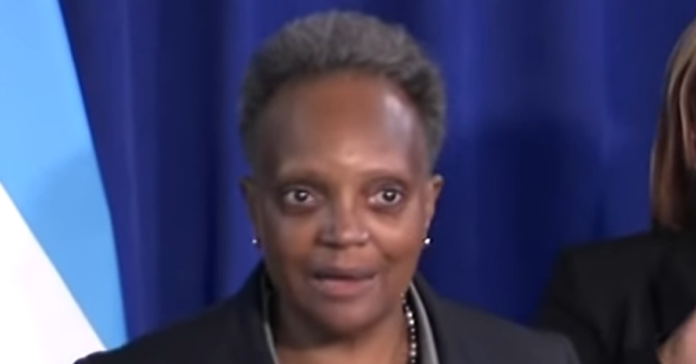 Chicago Mayor Lori Lightfoot was booed at a fundraiser for Plumbers Union Local 130 on Sunday in a bad sign for the embattled mayor. The mayor and her team tried to downplay the heckling but videos soon surfaced and went viral on social media.

“I was there when she was speaking. There were a couple of people in the corner that booed. But it was nothing significant. And it didn’t disrupt the event at all, she was able to finish her remarks, got a cheer at the end.”

He added: “I would have to suspect whoever was booing at that event was not a member of this local. We respect her and we have no problems with the mayor.”

Business manager Jim Coyne introduced Lightfoot to the crowd said: “I did not hear any booing “That’s kind of impossible at Plumbers Hall. She’s loved by the plumbers.

“People wanted to get in line and take pictures with her.”

Some attendees told the Chicago Sun-Times a different story:

“One attendee, who asked to remain anonymous, described Lightfoot as having been “booed off the stage” at the annual event at Plumbers Hall, 1340 W. Washington St., to raise money for Local 130’s political action committee — though a union official disputed that account.

“The person requesting anonymity said Lightfoot “spoke for less than a minute. And there was a resounding booing throughout the room.

“Almost deafening, I was sitting at the table with a bunch of plumbers. They’re like, `We’ve never heard that before here.’

“Clearly, their membership is not with her. They were calling her names. It was bad.”

“I don’t believe that she was, quote-unquote, ‘booed’ at this event,” he told the outlet. “I believe she was well received. There may have been a couple of people in the room who came in there to shout and be loud.”

Lightfoot has sparked the ire of unions over her vaccine mandate, which requires city workers to report their COVID-19 vaccination status or be placed on unpaid leave.