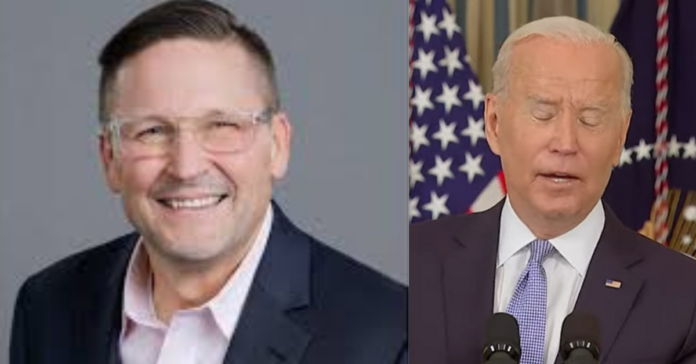 The GOP just put President Joe Biden and Speaker Nancy Pelosi on notice by flipping a seat the Dems have held for decades in an Iowa State House in a special election.

“Though tonight is not the result we hoped for, I am deeply grateful to have had your support and I’m proud of the race we ran,” Steven Mullan said. “We championed issues that matter to voters like public education, healthcare, and rural broadband access. Our advocacy on these issues will not stop with this campaign.”

“This is a seat we’ve been wanting for so long, and after Zach Nunn won we knew it was possible. Jon won in a district that leans blue still. It shows how much work he’s put into it.”

“Jasper County has a representative that reflects the voters,” he said of the county turning red.

“People were not expecting him to resign at the time he did, which then the governor, who is a Republican, was able to use the calendar based on his resignation to make an advantage for the Republican candidate who already ran for the same seat before. There was a clear advantage going to Jon.”

The district, based around Newton, about half an hour east of Des Moines along Interstate 80, has been trending Republican in recent years.

Jasper County gave former President Trump 60 percent of the vote in 2020, the highest share any Republican had earned there since Herbert Hoover in 1928. Before Trump, Jasper County had voted for the Democratic presidential nominee in six of the preceding seven presidential elections. Dunwell’s new district gave Trump 57 percent of the vote; in 2012, then-President Obama carried the seat with 56 percent.

Newton, the county seat, was once a major manufacturing hub, the home of a major Maytag plant that closed in 2007. The city is still home to the Maytag Blue Cheese Company, opened a century ago by an heir to the Maytag Appliance fortune.

Dunwell was ahead with nearly 60% of the vote, a 930-vote difference.

Madden NFL to cancel Jon Gruden from their game

Ruth Bader Ginsburg Slams Anthem Kneelers From The Grave: “Contempt for a government that has made it possible for their parents and grandparents to live a decent life”