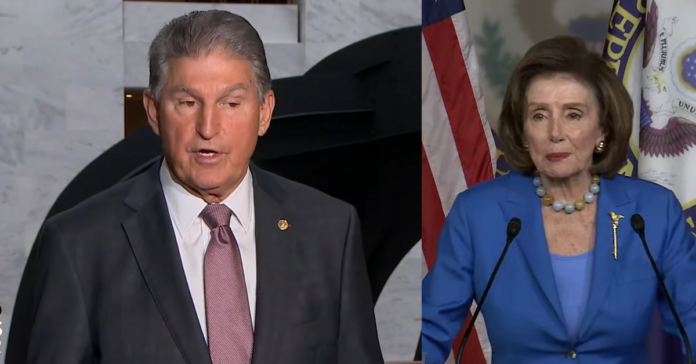 Speaker Nancy Pelosi caved today to Joe Manchin saying difficult decisions on how to pass Biden’s agenda are needed so the Dems can pass something and avoid suffering a humiliating defeat.

“In order to pass both the Build Back Better Act and the Bipartisan Infrastructure Bill on time, it is essential that difficult decisions must be made very soon,” Pelosi wrote to House Democrats.

She added: “Overwhelmingly, the guidance I am receiving from Members is to do fewer things well so that we can still have a transformative impact on families in the workplace and responsibly address the climate crisis: a Build Back Better agenda for jobs and the planet for the children.”

“We have some important decisions to make in the next few days so we can succeed,” she said to reporters today before adding that she’s “very disappointed” the bill won’t be $3.5 trillion.

“It will be transformative. It will produce results,” she said.

The party has had to tread carefully to move forward with both planks of Biden’s agenda. The House had to delay approval of the Senate-passed bipartisan infrastructure bill after progressives threatened to vote against it until the Senate takes up Democrats’ bigger plan.

Democrats aim to pass their larger bill through budget reconciliation, which allows legislation to get through the Senate with a simple majority. Still, the party cannot afford any defections in the Senate and can lose only three votes in the House.

The cuts will not be easy with her fractured caucus. From The Hill:

For example, if the money dedicated to home health care continues to shrink, then they will have to choose between expanding access to care or raising the wages of caretakers.

Republicans and moderate Democrats have criticized the price tag tied to the bill, which Democrats hope to pass without Republican support through the budget reconciliation process.

Sen. Joe Manchin (D-W.Va.) initially said he wouldn’t support a bill costing more than $1.5 trillion, more than half of what Democrats were originally attempting to pass. He later signaled that he would be open to around $1.9 trillion to $2.2 trillion.

Pelosi grins when she’s asked what program will be the first to go in order to cut the price tag.

“You must be kidding.”

She says that’s part of the negotiation and won’t discuss it publicly.

She does note that some dates will be moved up to lower cost.

YOU MUST COMPLY! NBA All-Star Player BANNED From Court Until He Complies With COVID Jab Mandate

OK Superintendent Joy Hofmeister Leaves GOP, Will Run For Governor As A Democrat