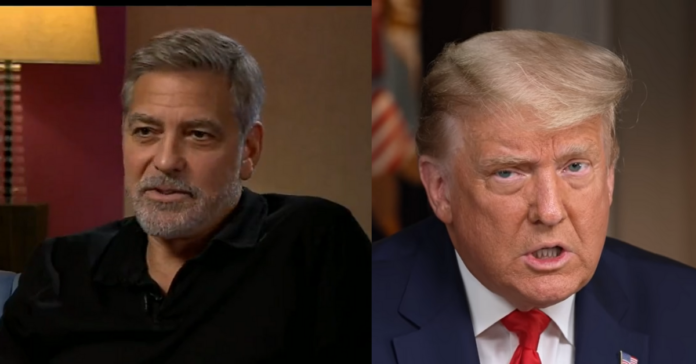 Hollywood star George Clooney went over to England to promote his new movie and took a few swipes at former President Donald Trump and his supporters.

Clooney sat for an interview with Andrew Marr to promote The Tender Bar when the topic turned to Trump and politics. Clooney claimed to have known Trump from celebrity events before Trump turned to politics and then trashed the former president.

Clooney said: “It’s so funny because he was just this knucklehead. I knew him before he was a president, he was just a guy who was chasing girls. Every time you went out he’d come over and go ‘what’s the name of that girl?’ That’s all he was.”

“The idea that there is a whole group of people that, you know, think he’s the champion of which but certainly can’t stand in real life.”

Asked if he thinks Trump will run again, Clooney said:

“He’s gonna play this out for a while and we’ll see where we go with this as a country.

“My hope is that we have a little better sense to do that again, that’s my hope.”

Joe Biden’s terrible performance will have more to do with Trump’s decision than most realize. If Biden keeps dropping the ball Trump and others will smell the weakness and all bets are off.

Republican senators, including possible presidential hopefuls, have blasted the latest disappointing jobs report, as well as President Biden’s efforts to portray the shortage as part of “progress.”

The September jobs report showed the economy adding 194,000 jobs – well short of the 500,000 new jobs expected. Republicans have largely targeted the double track of benefits for the unemployed and various mandates that restrict eligibility for some jobs.

No one spared criticism for Biden or his policies, with Sen. Lindsey Graham, R-S.C., saying the administration “has been throwing a wet blanket over job creators.”

Chairman of the Senate Republican Conference Sen. John Barrasso, R-Wyo., told FOX Business that “The Biden economy is failing Americans who want to get back to work and put the virus behind them.”

“The months of disappointing jobs reports are a direct result of President Biden’s failed policies,” Sen. Tim Scott, R-S.C., told FOX Business. “This administration’s plan of paying people not to work and burdensome mandates has crippled our economy at a time when middle-class Americans are already struggling to afford basic necessities due to inflation.”

George Clooney – Donald Trump is just a knucklehead… he was just a guy who chased girls… that’s all he was..#Phillips #marr pic.twitter.com/ab0doCf8u1

Passengers Furious After Hundreds of Flights Cancelled...Reported 'Sick Out' by Pilots and ATC Due to COVID Vax Mandate [Video]