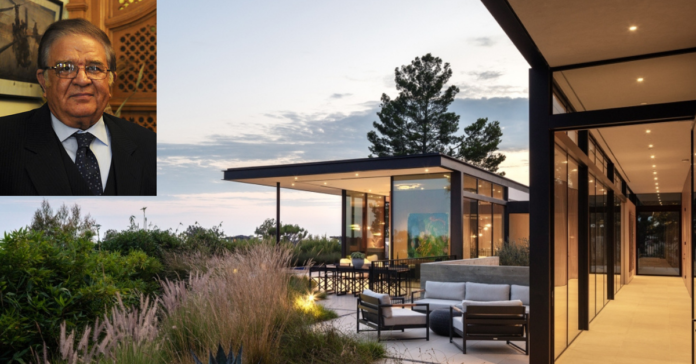 Just when you think the debacle in Kabul could not possibly get worse or more humiliating for President Joe Biden and those who came before comes news that the son of the former defense minister to Afghanistan just spent $20 million on a mansion in Beverly Hills.

No word on whether he will rent it on Airbnb for free to the US taxpayer who most certainly had a hand in funding this ‘mysterious’ businessman’s rise to the top of the world’s wealthy.

Daoud Wardak also owns a $5.2 million Miami Beach condo at the prestigious St. Regis Bal Harbour Resort in case you were wondering where he lived before buying the mansion. His family of course has made a lot of money over the years getting sweet government contracts to help run Afghanistan.

According to Yahoo: Not much is publicly known about the various business interests or wealth origins of Wardak, an ethnic Pashtun refugee who was born in Afghanistan in 1977.

Based in Virginia but operating primarily in Afghanistan, NCL has secured lucrative U.S. government contracts in exchange for protecting American supply routes in Afghanistan; those contracts were reportedly worth north of a whopping $360 million.

While Mr. Wardak is in fact a refugee from Afghanistan, having come to the United States at age three, he is also profiting from the War in Afghanistan, now in its 10th year, to the tune of almost half a billion dollars, according to the Washington Post.

In addition, he is connected to lobbying efforts (spearheaded by Patton Boggs, LLC – a sponsor of Wednesday’s event) to keep the United States involved in the Afghanistan conflict, according to The Nation.

Though Washington Life magazine, another sponsor of Wednesday night’s “Blue Key: Miami to DC” event, called Wardak a “philanthropist,” the magazine makes no mention (and neither did Wardak) of his McLean-based “transportation company” that scored up to $360 million in defense contracts for safe transportation for U.S. trucks and convoys in Afghanistan.

As the Washington Post wrote last year in March, in a hard-hitting article entitled “Afghan Corruption: How to Follow the Money?” Wardak is profiled as a man of many connections, possibly to the Taliban and corrupt Afghan officials, and mysterious spending and accounting.

Wardak’s money comes from a transportation company that, according to the Washington Post, is based in “a bare bones office” in McLean, VA “with no trucks.”

According to senior Obama administration officials, some of it may be going to the Taliban, as part of a protection racket in which insurgents and local warlords are paid to allow the trucks unimpeded passage, often sending their own vehicles to accompany the convoys through their areas of control.

Mired in scandal, Wardak would seemingly like for everyone to associate his name with Ludus Athletics, a new clothing company he founded recently in Miami. At this time, the Ludus Athletics Web site is merely a full-page advertisement for Wednesday’s event.