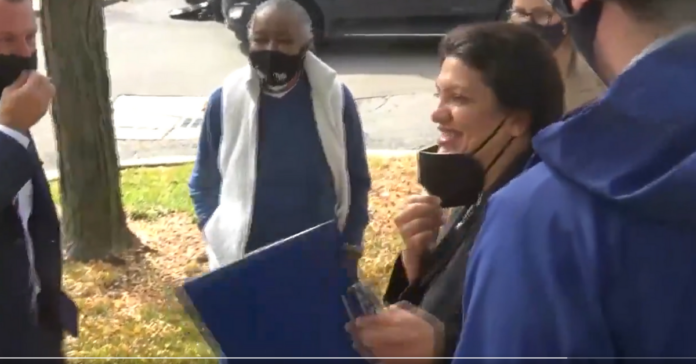 Rep. Rashida Tlaib, D-Mich., got busted by a GOP tracker admitting the hypocritical truth for the cameras. A tracker is a political operative who follows politicians around hoping to bust them doing something that can be used against them in the next campaign.

The GOP tracker delivered this time as Tlaib was caught on camera saying she was only wearing a mask because she was being tailed by a “Republican tracker.”

The Michigan congresswoman made the stunning admission while speaking to a maskless attendee at an event in Detroit featuring Housing and Urban Development (HUD) Secretary Marcia Fudge.

From The Washington Free Beacon:

Just weeks before the event, the “Squad” member faced criticism when she danced maskless at a crowded, indoor wedding in Dearborn, Mich.

Tlaib attended the wedding days after the CDC recommended wearing masks indoors regardless of vaccination status in local areas with “high” community transmission—a categorization that applied to Dearborn at the time.

Tlaib, who did not return a request for comment, is far from the only Democrat to ignore her own rhetoric on masks.

Fellow “Squad” member Rep. Alexandria Ocasio-Cortez (D., N.Y.) masked up for an August photo with liberal activists but Quickly Removed her face covering after the picture was taken.

One month prior, Virginia gubernatorial nominee Terry McAuliffe (D.) violated federal regulations when he refused to wear a mask on an Amtrak train.

McAuliffe has pledged to maintain the state’s mask mandate in schools and told voters in September to “follow the CDC guidelines.”

President Joe Biden in July told “all Americans who live in the areas covered by the CDC guidance” to wear a mask—a sentiment that Fudge herself has Echoed.

HUD did not respond to a request for comment.

Fudge is not featured in the video, but she would not be the first Biden administration official who has condoned violations of mask requirements. U.S. Agency for International Development head Samantha Power rode an Amtrak train maskless in September.

Climate envoy John Kerry, meanwhile, was caught removing his mask during an American Airlines flight in March and again at Boston Logan International Airport in July.

Caught on Video: @RashidaTlaib Admits She Only Wears Mask for Cameras