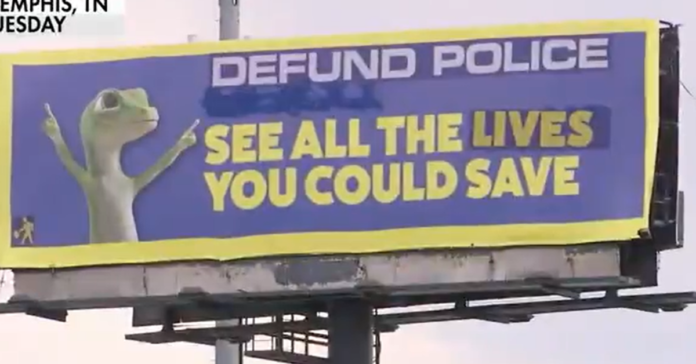 The Memphis Police Association is not happy with activists who changed two billboards in the Tennessee city to read “defund the police,” including one near the location of an officer’s death last week.

They were defaced to read: “Defund Police. See All The Lives You Could Save.”

Memphis Police Association President Lt. Essica Cage-Rosario said: “It’s very frustrating. Officers are already suffering the loss of a co-worker. This is the third officer we’ve lost in just as many months. So officers are already feeling a sense of remorse.

“They’re very saddened about the loss of their co-worker, and to see someone put up a billboard in the same area saying ‘defund the police,’ it’s a slap in the face.

“This group, they clearly took over someone else’s billboard and committed an act of vandalism, very brazen and very unnecessary if you ask me.

“It used to be a career where little kids wanted to be the police when they grew up. And over the years that has changed,” she said.

City council members Patrice Robinson and Frank Colvett were not happy with the stunt.

“Defunding the police is not what we mean, and we don’t want people to think that’s what we mean,” Robinson said.

“What we really mean is we want to invest more in our young people and people who need support,” Robinson added.

“When the sad tragedy happened in Collierville, they raced into the building to try to solve the problem, when the shooting at (Cummings School) K-12 happened and recent home invasion of a Rhodes student, it’s the Memphis Police Department that needs our support,” said Colvett.

“Not only fund the needs they (police) have, but also recruit and be able to recruit and get the numbers we all know the experts have said to get us to a more safe city.”

In an email sent to WREG, the group refers to itself as guerrilla activists art collective INDECLINE.

It says it took to the highways of Memphis to alter the message of two Geico insurance billboards with a call to defund police.

Indecline says it believes the reduction of the role that police play in our daily lives would benefit their safety as officers as much as ours as citizens.

The Memphis Police Association is furious after guerrilla activists altered Memphis billboards to read ‘defund the police’ near the site of an officer’s death last weekend.https://t.co/MtHbdEz8Vr

“Today, my heart aches again for the loss of another dedicated servant of our city. I am in deep prayer for our officer’s family and the men and women of the Memphis Police Department.” – Chief Cerelyn Davis pic.twitter.com/l4FfX15G4I