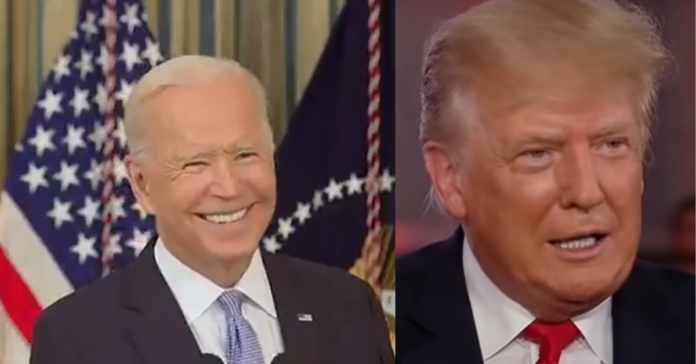 President Joe Biden is sinking in the polls and it is not because of the many debacles he has administered on his short watch. Those debacles have not helped for sure, but his bigger problem is that the Dems have not done much since they took over the government.

And with his agenda being held up by Dem infighting he has no one to blame but himself. Still, he tried to blame Trump today.

NBC News’ Peter Alexander said: “You came into office on a message of competence and unity. We’ve witnessed what’s happened in the country over the last several months. We’ve seen the chaotic troop withdrawal from Afghanistan, the threat of a government shutdown right now, and Democrats, members of your own party are still divided over your agenda going forward.

“So what do you say to Americans who say that you have not delivered on that promise?”

Joe Biden said: “Remember I said it’s going to take me a year to deliver on everything I’m looking at here, that’s number one.

“Number two, take a look at what I inherited when I came into office, the state of affairs, and where we were.

“We had four million people vaccinated.

“So part of it is dealing with the panoply of things that landed on my plate.

Biden continued going on not taking the blame for underselling his “overwhelmingly popular” economic plan because “not everybody knows what’s in that plan with everything happening.”

Look, no one really knows what the Dems did in their first year besides passing virtue-signaling bills like the abortion bill today that won’t pass the Senate.

They only have one year before the GOP takes back the House and makes it impossible for Biden do to much of anything. They have no one to blame but themselves.

Biden responds to his administration’s recent crises: “Take a look at what I inherited when I came into office, the state of affairs and where we were. We had 4 million people vaccinated, we had no plan — I could go down the list…I’m not complaining, it’s just the reality.” pic.twitter.com/xPT6TfOn4J

DHS Secretary Mayorkas tells @edokeefe he’s “going to take a look” at potentially eliminating horse patrols after agents used reins on migrants at the border. He says horses are often used to cross difficult terrain and the patrol “has actually saved lives many times before” pic.twitter.com/1hZ7E5Lqwo