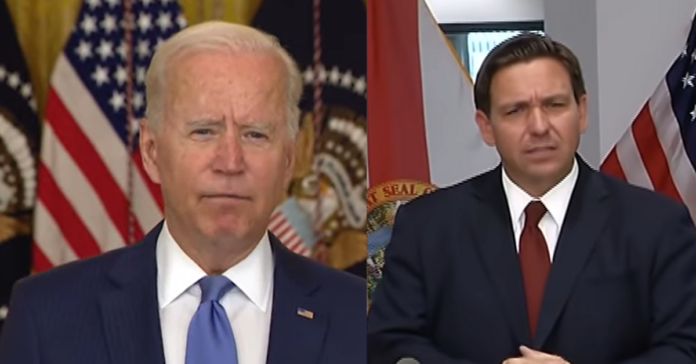 Ron DeSantis and Doug Ducey led 26 Governors from across this great country in demanding a solution Biden take action to solve the crisis at the southern border. With Kamala missing in action and Biden doing who knows what, the governors felt that had to take drastic action.

They demanded a meeting with Biden in a letter so they could sit down with Biden and basically show him how it’s done as he seems to have zero solutions so together they can ‘bring an end to the national security crisis. They wrote:

“As chief executives of our states, we request a meeting with you at The White House to bring an end to the national security crisis created by eight months of unenforced borders. The months-long surge in illegal crossings has instigated an international humanitarian crisis, spurred a spike in international criminal activity, and opened the floodgates to human traffickers and drug smugglers endangering public health and safety in our states.

A crisis that began at our southern border now extends beyond to every state and requires immediate action before the situation worsens.

The negative impacts of an unenforced border policy on the American people can no longer be ignored. Border apprehensions are up almost 500% compared to last year, totaling more than 1.3 million—more people than the populations of nine U.S. states.

Cartels and traffickers are making $14 million a day moving people illegally across the border.

More fentanyl has been seized this fiscal year than the last three years combined—almost 10,500 pounds of fentanyl when only 2 milligrams prove fatal. This is enough to kill seven times the U.S. population.

Despite the lack of federal action to reverse the crisis, many states have stepped up and committed unprecedented resources to support the security of our national border. We have heard directly from our constituents about the damage this crisis has caused in our states, and it is our duty as elected officials to act swiftly to protect our communities, as it is yours.

Our immigration system may be complicated and complex, but the solution to ending the border crisis is simple and straightforward.

As President, you have the ability to take action to protect America, restore security, and end the crisis now.

Therefore, we come directly to you seeking an open and constructive dialogue regarding border enforcement on behalf of U.S. citizens in our states and all those hoping to become U.S. citizens.

We must end the current crisis and return to border operations that respect the laws of our land and the lives of all people, including those in our states looking to the federal government to enforce and protect our nation’s borders.

Due to the emergent crisis, we respectfully request a meeting as soon as your schedule allows within 15 days.

While we know your responsibilities as Commander in Chief are substantial, ending the national crisis and securing our states must be a priority.”

The letter was signed by:

I sent a letter with 25 fellow governors requesting an urgent meeting with President Biden to find meaningful solutions to the worst border crisis in more than two decades.

WATCH: Chuck Todd admits Biden has "got a pretty big credibility crisis on his hands"