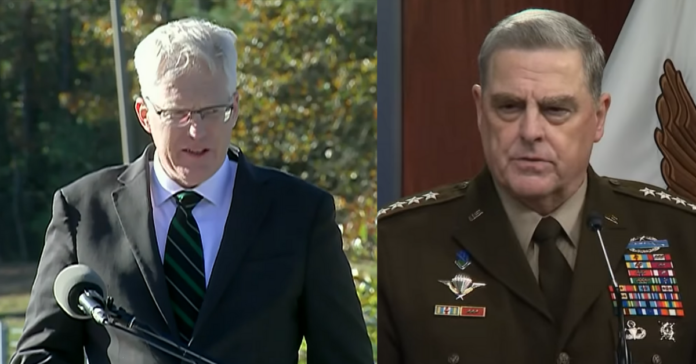 Former acting Secretary of Defense Christopher Miller, who led the Pentagon from the period after the 2020 election through Inauguration Day, said that he “did not and would not ever authorize” Chairman of the Joint Chiefs of Staff Gen. Mark Milley to have “secret” calls the Chinese in a blow to Milley.

He said the allegations are a “disgraceful and unprecedented act of insubordination” before demanding he resign “immediately” if the book’s allegations prove true.

Miller said: “The Chairman of the Joint Chiefs of Staff is the highest-ranking military officer whose sole role is providing military-specific advice to the president, and by law is prohibited from exercising executive authority to command forces.

“The chain of command runs from the President to the Secretary of Defense, not through the Chairman.

“If the reporting in Woodward’s book is accurate, it represents a disgraceful and unprecedented act of insubordination by the Nation’s top military officer.

“If the histrionic outbursts and unsanctioned, anti-Constitutional involvement in foreign policy prove true, he must resign immediately or be fired by the Secretary of Defense to guarantee the sanctity of the officer corps.

“Pursuit of partisan politics and individual self-interests are a violation of an officer’s sacred duty and have no place in the United States military.

“As secretary of defense, I did not and would not ever authorize such conduct.

“Any accusations that President Trump was intent on starting a war with China are completely unfounded.

“President Trump absolutely believed and advocated for a more aggressive approach to China, but he was elected to end our Nation’s wars, not start new ones.

“I was proud to play a small role in achieving those goals.

“I look forward to a full, non-partisan investigation of the accusations made by Woodward to guarantee that the genius of our Founders and following generations that established a system and culture of the subservience of our military – the most powerful force in our Nation – to civilian control endures.”

A spokesman for the Joint Chiefs of Staff, Col. Dave Butler said:

“The Chairman of the Joint Chiefs regularly communicates with Chiefs of Defense across the world, including with China and Russia.

“His calls with the Chinese and others in October and January were in keeping with these duties and responsibilities conveying reassurance in order to maintain strategic stability.

“All calls from the Chairman to his counterparts, including those reported, are staffed, coordinated and communicated with the Department of Defense and the interagency.

“Also in keeping with his responsibilities as senior military advisor to the President and Secretary of Defense, General Milley frequently conducts meetings with uniformed leaders across the Services to ensure all leaders are aware of current issues.

“The meeting regarding nuclear weapons protocols was to remind uniformed leaders in the Pentagon of the long-established and robust procedures in light of media reporting on the subject.

“General Milley continues to act and advise within his authority in the lawful tradition of civilian control of the military and his oath to the Constitution.”

Former chief of staff for the Department of Defense Kash Patel said, “the law governing the Joint Chiefs of Staff specifically forbids the chairman from exercising any operational command authority.

“Congress put this in the statute because the U.S. military is to be led by a civilian, the commander-in-chief.

“Furthermore, by law, the national command authority goes from the president to the secretary of Defense to include anything relating troop deployments, operations in theaters of war, and nuclear command.”