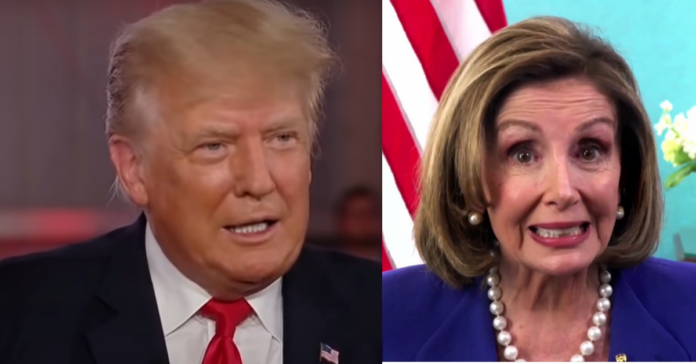 Nancy Pelosi virtue signals whenever she gets in front of a microphone so it is important to know what she says when the cameras are off. And based on excerpts from Bob Woodward’s new book, we know she is vastly different off-camera than on.

She called Trump fat and crazy according to the book before working with General Milley to put safeguards in place to make sure Trump couldn’t go rogue.

“What I’m saying to you is that if they couldn’t even stop him from an assault on the Capitol, who even knows what else he may do? And is there anybody in charge at the White House who was doing anything but kissing his fat butt all over this?”

“You know he’s crazy. He’s been crazy for a long time.”

Milley responded, “Madam Speaker, I agree with you on everything.”

According to the book, a key figure from Trump’s earliest days as president reemerged: former White House adviser Steve Bannon. The authors write that Bannon, who had been indicted in April 2020 and later pardoned by Trump, played a critical role in the events leading up to January 6.

On December 30, Bannon convinced Trump to come back to the White House from Mar-a-Lago to prepare for the events of January 6, the date Congress would certify the election results.

“You’ve got to return to Washington and make a dramatic return today,” Bannon told Trump, according to the book. “You’ve got to call Pence off the fucking ski slopes and get him back here today. This is a crisis.”

The authors write that Bannon told Trump that January 6 was “the moment for reckoning.”

“People are going to go, ‘What the fuck is going on here?’ ” Bannon believed. “We’re going to bury Biden on January 6th, fucking bury him,” Bannon said.

Trump to Pence: ‘I don’t want to be your friend anymore’

“Peril” also describes the tense encounter in the Oval Office on January 5 when Trump pressured Pence to overturn the results of the election. While the showdown went on inside, the two men could hear MAGA supporters cheering and chanting outside near Pennsylvania Avenue.

“If these people say you had the power, wouldn’t you want to?” Trump asked.

“I wouldn’t want any one person to have that authority,” Pence said.

“But wouldn’t it be almost cool to have that power?” Trump asked, according to Woodward and Costa.

“No,” Pence said. He went on, “I’ve done everything I could and then some to find a way around this. It’s simply not possible.”

When Pence did not budge, Trump turned on him.

“No, no, no!” Trump shouted, according to the authors. “You don’t understand, Mike. You can do this. I don’t want to be your friend anymore if you don’t do this.”

Trump has some harsh words for Kevin McCarthy in the book, even after their Mar-a-Lago meeting. “This guy called me every single day, pretended to be my best friend, and then, he fucked me. He’s not a good guy,” Trump is quoted as saying

Dem Strategist: My Party ‘Could Endure A Blowout Defeat’ In 2022