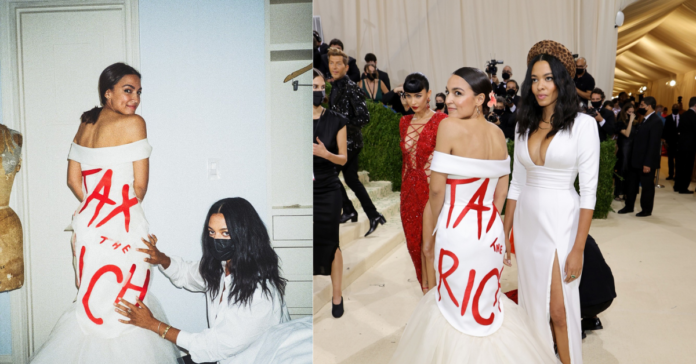 Rep. Alexandria Ocasio-Cortez went to the biggest celebrity party of the year, one full of the wealthiest people in America, wearing a white dress with “Tax The Rich” splashed in red on the back.

She was taken to task by almost everyone for not only going to the Met Gala but for the obnoxious dress. She was defiant in face of the criticism saying: “The medium is the message.

“Proud to work with @aurorajames as a sustainably focused, Black woman immigrant designer who went from starting her dream @brothervellies at a flea market in Brooklyn to winning the @cfda against all odds- and then work together to kick open the doors at the Met.

“The Time is now for childcare, healthcare, and climate action for all. Tax the Rich,” she said.

The designer AOC speaks of immigrated from Canada and the tickets to the event cost more than $30,000.

“Custom TAX THE RICH dress while at the most elitist event in the world.

“@AOC will soon be rich with a ginormous production deal from somewhere & done with Politics, guarantee it.

“Stop treating ANY of these people like celebrities they are public servants and work for us.”

The medium is the message. pic.twitter.com/b4Ssr6HkYR

I too am a member of the working class at a $174,000 salary. pic.twitter.com/cwnPCiQsNP

Mark Levin Calls For Biden To Be Impeached, Says He Violated The Constitution