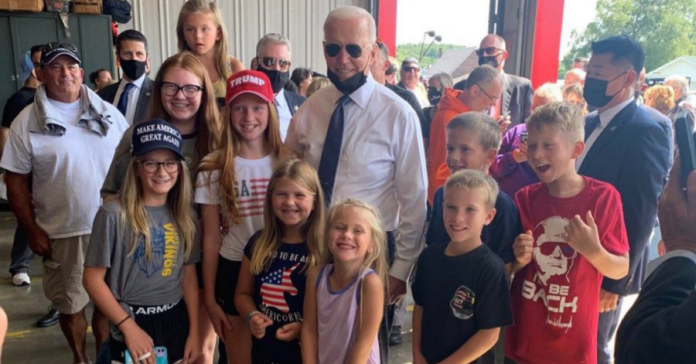 President Biden’s 9/11 weekend was full of the usual events but thankfully a bunch of kids shattered the staged photo ops with a trolling for the ages.

While in Shanksville with Jill Biden to commemorate the heroism of Flight 93, Biden took a quick photo-op with some kids. We don’t know if this was planned but we do know these events are all staged and everyone who gets near the president is fully vetted in some form.

It’s possible Biden or his clueless team didn’t notice or thought it would be worse optics to tell the kids to take off their pro-Trump gear, but the kids got the picture and the rest is history.

Biden said in some video remarks:

“As we saw in the days that followed, unity is our greatest strength. It’s what makes us who we are — and we can’t forget that.

“We also witnessed the dark forces of human nature.

“Resentment and violence against Muslim-Americans — true and faithful followers of a peaceful religion,” Biden said.

Can you see all the pro-Trump gear in the below photo? One young lady is wearing a bright red hat that says “Trump” standing right next to Biden.

There is a girl wearing a blue “Make America Great Again” hat.

And the young man on the right wearing a red Trump “I’ll Be Back” t-shirt.

This is even more humiliating than him getting booed at the WTC memorial pic.twitter.com/n51vIiieN4

He ripped Joe Biden for the debacle in Kabul again before taking questions from the crowd. One was about his intentions to run again in 2024 to which he answered:

“They gave 85 billion of it away, brand-new Apache helicopters. Can you believe they gave them away? Why would you? You fly them out,” Trump said.

“And they had all the time in the world. We had everybody on hold. The Taliban was on hold. I dealt with the top guy, Abdul. And there was nothing he was going to be doing with us.”

Democrat Resigns From Arizona Senate To Focus On Congressional Run

"This has been happening all morning"...Republicans in California Told They Already Voted When They Show Up to Vote