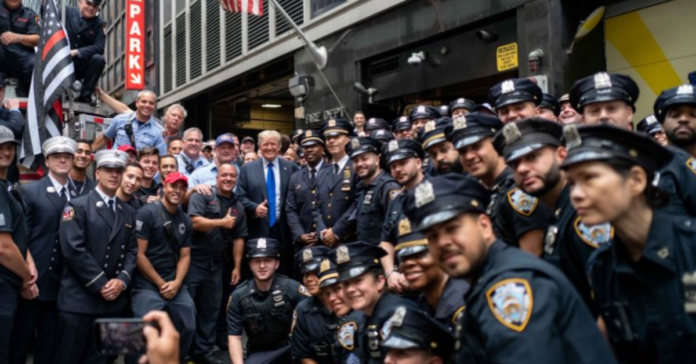 Former President Donald Trump surprised officers at NYPD’s 17th Precinct in East Midtown in Manhattan, New York City, Saturday afternoon. He posed for photos with a group of cops and firemen and held a brief question and answer session and made some short remarks.

“They gave 85 billion of it away, brand-new Apache helicopters. Can you believe they gave them away? Why would you? You fly them out,” Trump said. “And they had all the time in the world. We had everybody on hold. The Taliban was on hold. I dealt with the top guy, Abdul. And there was nothing he was going to be doing with us.”

As well as the visit to the precinct, Harrington said he was expected to virtually speak at an evangelical event at the National Mall in Washington DC around 6:50pm.

Cops and firefighters cheered and applauded the former president during his visit Saturday afternoon, with one fan heard shouting: ‘Thank you for keeping us safe.’

In his brief address before taking questions, Trump described the anniversary as a ‘sad day’ before launching into an attack on Biden over Afghanistan.

‘For a lot of reasons and we just added to that reason last week as it should never have been allowed to happen.

‘I watched all the speeches and nobody mentioned what they did but we have to live with it for a period of time. It’s very disappointing.’

The former president circled back to Afghanistan later describing the Biden administration’s withdrawal as ‘gross incompetence’ and claiming his deal with ‘Abdul’ from the Taliban meant the militants were ‘on hold.’

He continued to slam the president’s handling of the withdrawal saying ‘a five-year-old would have said the military goes out last.’

‘They could have stayed there for one month or three years. They [the Taliban] weren’t going to be able to do anything but they left and when they left there was a vacuum,’ Trump said.

‘And then they came in and filled the vacuum and whoever thought of this – a five-year-old would have said the military goes out last and that’s what they [the Taliban] wanted.

‘They couldn’t believe they were leaving so it was gross incompetence and I hate to talk about it on this day but people are saying why aren’t they talking about what the hell they did.’

BREAKING: President Trump just made a surprise visit to the NYPD and FDNY on the 20th Anniversary of 9/11

“We’re not supposed to say it, but I’ll say it. We love the Blue.” pic.twitter.com/1aSAvkEpZe