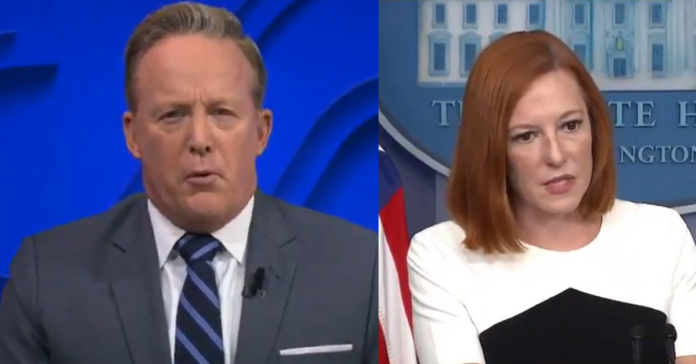 Spicer said: “We have got some breaking news tonight. All Trump appointees, including myself, have been kicked off the boards of the United States Naval Academy, Air Force Academy, and West Point in an unprecedented move by the Biden administration. I am announcing tonight I will not resign, and I will be joining a lawsuit to fight this.”

“I will let others evaluate whether they think Kellyanne Conway and Sean Spicer and others were qualified or not political to serve on these boards.”

Spicer fired back at Psaki. He said: “I follow tradition. Press secretaries never comment on the previous press secretary and are the current one, and I’ve respected that.

“I haven’t responded to Jen or reacted to her, but she crossed the line today. She chose to bring me into this.

“So, Jen, you want to know about my qualifications? Joining the military and wearing the uniform of this amazing country remains one of my greatest decisions in life.

“For 22 years, I’ve had the honor of serving alongside some of the most talented, patriotic, and brave individuals this country has to offer.

“I’m a proud graduate of the U.S. Naval War College. I’ve done multiple tours, and politics has never entered into my service. I’ve served under five different presidents of both parties. When you wear the uniform, you serve the commander-in-chief.

“We take an oath as officers to the Constitution, not to a party. Each of us chooses how we’re going to serve this country.

“I won’t ever question how anyone chooses to do that.

“I won’t question how you choose to do that, Jen. But don’t you dare ever minimize or question my service to this nation. You got it?”

BREAKING: As the Biden administration attempts to remove Trump appointees from their Military Academy boards, @seanspicer calls out White House Press Secretary Jen Psaki, and announces he will take legal action against the decision. pic.twitter.com/bPgLlJhFzK

As Domestic, International Crisis Rage, Harris Head to CA to Campaign For Newsom