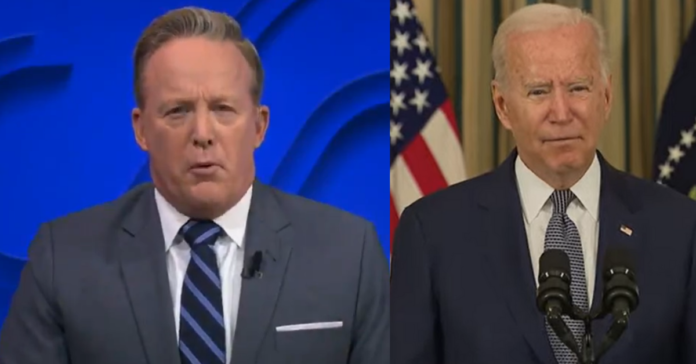 White House press secretary Jen Psaki confirmed the news that the Biden administration was indeed firing a bunch of Trump appointees from advisory board positions.

“And so yes, that was an ask that was made. I will let others evaluate whether they think Kellyanne Conway and Sean Spicer and others were qualified to serve on these boards,” she added.

Enter Former White House press secretary and current Newsmax host Sean Spicer who ripped the move. He said that not only will he not resign but that he will sue Joe Biden.

“I will not be submitting my resignation and I will be joining a lawsuit to fight this,” Spicer said.

“Press secretaries never comment on the previous press secretary or the current one, and I’ve respected that. I haven’t responded to Jen or reacted to her, but she crossed a line today. She chose to bring me into this,” Spicer said.

“For 22 years I have had the honor of serving alongside some of the most talented, patriotic and brave individuals this country has to offer.

“I won’t ever question how anyone chooses to serve this country.

“I won’t question how you choose to do that, Jen.

“But don’t you dare minimize or question my service to this nation. You got it?” Spicer said.

Kellyanne Conway, who was on the Board of Visitors to the United States Air Force Academy, called the move “petty and political, if not personal,” before saying she would not resign and that Biden should.

Russell Vought, a former Director of the Office of Management and Budget under Trump, also refused to resign saying: “No. It’s a three year term.”

At the @WhiteHouse press briefing today @PressSec @jrpsaki questioned my qualifications to serve on the Board of Visitors to the US Naval Academy. I responded tonight @newsmax Watch below https://t.co/cz7Ap96Ijc

President Biden, I’m not resigning, but you should. pic.twitter.com/HuRYM4bLYP