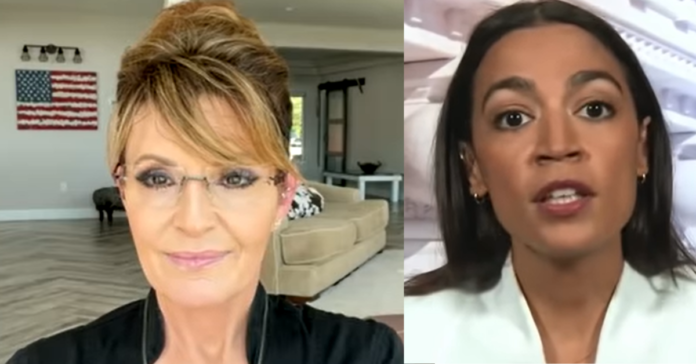 Sarah said: “Wow, AOC, she is really milking this, isn’t it?. She is such a fake feminist that she would bring up an issue like this and try to use it to make some kind of political point. That’s not equality, right?

“Oh, man, don’t even get me started on this. This just makes my stomach sick, what she has done. She should be embarrassed to even have tried to bring up an issue like that and make her political point.

“She is so off-base politically, but off-base even in this analogy or whatever it is that she is throwing out there. She is milking the whole female thing.

“They are capable of doing a lot more than AOC gives women credit for.

“Yes, we can give life to a child, and at the same time pursue education, and pursue a career, and take care of our other children, or give a child up for adoption, if we do not feel that we can take care of that child.

“She has no idea. Her worldview is this big.

“And we’re able then to make judgments and make our decisions on those life experiences.

“She has got this much. And she is running the show?” she said.

Some women also *don’t* menstruate for many reasons, including surviving cancer that required a hysterectomy.

GOP mad at this are protecting the patriarchal idea that women are most valuable as uterus holders. pic.twitter.com/BJovcw1qPa

People can stay mad about that if they want, or they can grow up ✌🏽🏳️‍🌈 🏳️‍⚧️