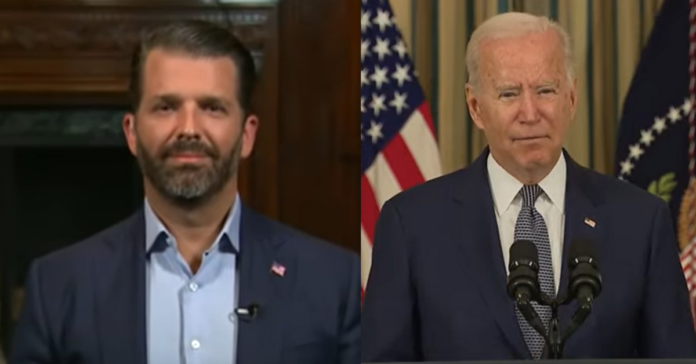 Donald Trump Jr. got a huge victory over President Joe Biden as the administration reportedly will pull Biden’s controversial pick to lead the Bureau of Alcohol, Tobacco, Firearms and Explosives. Many in the GOP were not happy with the pick and tried to sink it but none did as much damage as Trump Jr.

He lobbied aggressively against David Chipman, Biden’s pick, but did it in a novel and quiet way. He targeted red state Democrats like Jon Tester and Joe Manchin.

Trump Jr. went after them by publishing op-eds in a variety of local news outlets in Montana and West Virginia. In those, he called Chipman “the greatest threat” to our Second Amendment rights. He also warned that Chipman would “shred” their constitutional rights.

“We would be taking a guy whose current job is to advocate for guns being taken away from law-abiding citizens, and actually give him the power to do it,” Trump Jr. wrote in one.

“I want all of you guys to call your senators and make sure that this guy doesn’t get confirmed,” Trump Jr. said during a speech at CPAC in July keeping up the pressure. “Ask them, are they going to nominate someone that says they’re going to take your guns away, your AR-15?”

“Glad to hear reports the White House is taking my advice and pulling the terrible nomination of David Chipman,” Mitch McConnell said. “Absurd that a vocal opponent of Americans’ constitutional rights was ever picked to run ATF. This is a win for the Second Amendment and law-abiding American citizens.”

“I’ve been opposed to David Chipman leading the ATF from the start. He’s an anti-Second Amendment, gun-grabbing radical that should not lead the agency that regulates firearms,” Sen. Steve Daines, R-Mont., said.

The White House is withdrawing the nomination of David Chipman to run the Bureau of Alcohol Tobacco (ATF) and Firearms, Fox News has confirmed.

Chipman, who had a history of caustic comments about gun owners and worked for gun control groups for years after his career as an ATF agent, was staunchly opposed by Republicans. But he struggled to gain the support of several Democrats, who never explicitly opposed Chipman’s nomination but also never publicly supported him either.

“The record he concealed from Congress, some of which remains hidden to this day, about how he treated his fellow employees while at the ATF confirms his lack of fitness to lead the agency.”

Glad to hear reports the White House is taking my advice and pulling the terrible nomination of David Chipman. Absurd that a vocal opponent of Americans’ constitutional rights was ever picked to run ATF. This is a win for the Second Amendment and law-abiding American citizens.

I was proud to lead 68 of my colleagues in the fight against Chipman’s nomination earlier this year.

The efforts from second amendment allies like @DonaldJTrumpJr to stop this radical, anti-gun activist from leading the ATF were very consequential!https://t.co/wcRxDPy7Oe

Trump endorses Republican woman to run against Liz Cheney "Unlike RINO Liz Cheney, Harriet is all in for America First"