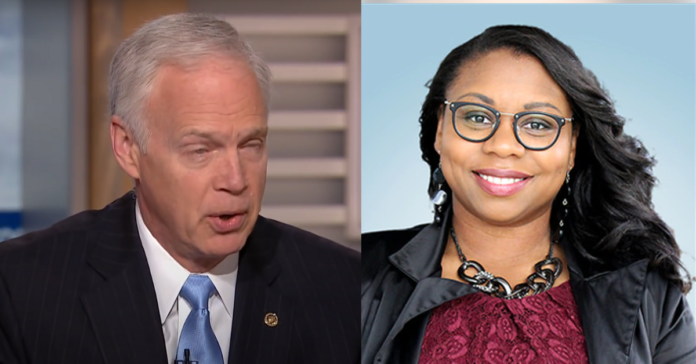 Milwaukee City Councilwoman Chantia Lewis, who is running for the Senate seat held by Ron Johnson (R-Wis.), just got some career-ending news. She was charged yesterday with multiple felonies for allegedly stealing $21,000 from her own campaign.

“In light of the five felony charges brought against Alderwoman Chantia Lewis by Milwaukee County District Attorney John Chisholm, I am, effective immediately, relieving her of all committee assignment duties. Make no mistake that our judicial system presumes that every individual is considered innocent until proven guilty in court. However, until this matter is resolved, I am moving without hesitation to protect the institution of the Milwaukee Common Council, as well as the City of Milwaukee,” Council President Cavalier Johnson said.

“We will make the necessary corrections. But make no mistake, I am innocent of any criminal wrongdoing,” Lewis said in the statement. “As a first-time candidate in 2016, and like many first-time grassroot candidates, I self-funded much of my campaign.”

“My campaign was run by my family and a team of amazing supporters. We did our very best to run a positive and compliant campaign. I am confident that once this is over, I will be absolved,” the statement said.

She was charged with:

The embezzlement charge alone carries a maximum penalty of 10 years in prison and up to $25,000 in fines.

A criminal complaint filed by the District Attorney’s Office says from April of 2016 to June of 2020, Lewis allegedly took at least $21,666.70 from her campaign finances and city reimbursements.

The criminal complaint says, “She misappropriated funds belonging to her campaign by depositing campaign contributions into her personal bank accounts, as well as using campaign funds to pay for personal expenses. Lewis further falsely represented to the City of Milwaukee that she was owed reimbursement for expenses incurred on City-travel, when in fact she paid for those expenses out of her campaign account.

All of these behaviors were in excess of her authority and were done without consent.”