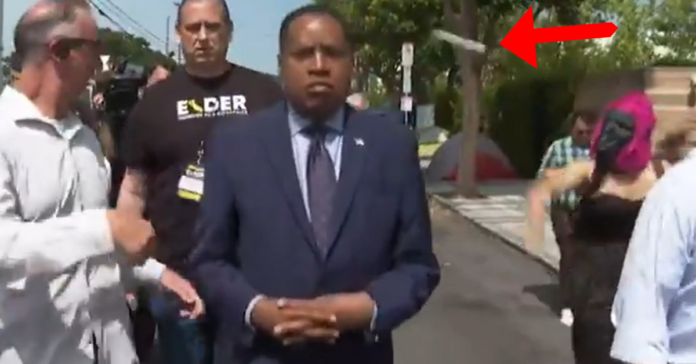 Today as Elder was at a campaign event, a goon wearing a monkey mask came up behind and started throwing eggs. The eggs barely missed Elder as he was hustled away but some of his people who turned to confront the protesters were not as lucky.

Elder was walking through the Venice neighborhood with members of his campaign team when the cowardly goon snuck up and tried to egg the leading candidate to replace Newsom.

Videos of the incident show a first egg nearly hitting Elder while a member of Elder’s team seems to get hit with an egg later after confronting the crowd.

He can be heard saying: “we’re getting egged from behind.”

Shortly after that, someone threw a second egg towards Elder and his team. It is unclear from the videos if Elder was hit by any eggs. A video posted to Twitter shows a woman in the gorilla mask threw at least one of the eggs.

Multiple people also became physically aggressive towards Elder’s team, including the woman in the gorilla mask who appeared to slap a staffer in the face.

One man could be heard calling Elder a “piece of s**t” as Elder was escorted into his vehicle.

Elder, who would be the first Black governor of California if elected, is widely considered the leading Republican challenger to Gov. Gavin Newsom in this month’s recall election.

Breaking: A flying egg narrowly missed the back of recall candidate @larryelder‘s head after it was thrown by an activist wearing a gorilla mask in Venice. A scuffle broke out and the candidate was escorted into an SUV.