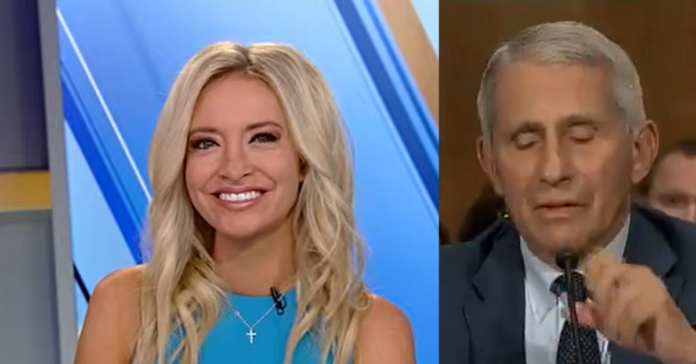 Fox News’ Kayleigh McEnany dropped the hammer on Dr. Anthony Fauci after leaked documents show he may have not been entirely truthful to Congress when he testified about what he knew about Wuhan lab funding.

Kayleigh said: “He can’t be truthful because the truth would mean that very likely, if this did originate in the lab, U.S. taxpayer dollars helped to fund a pandemic that was unleashed upon the world out of a lab in Wuhan, China.

“What is so galling to me is when you read these 900 pages of documents that were obtained by The Intercept, the grant request actually acknowledges the dangers of this research.

“So Dr. Fauci, I presume he read the application for the grant which said this: ‘The grant proposal acknowledges some of these dangers. Field work involves the highest risk of exposure to SARS or other COVIDs while working in caves with high bat density overhead and potential fecal dust to be inhaled.’

“So presumably he read this and presumably he greenlighted the funding and now lying about it to Congress. But Senator Rand Paul has been on this from the beginning. I hope he continues,” she said.

Rand Paul said: “ I was right about his agency. Read this thread and the papers released.”

He pointed to a thread by Richard H. Ebright, professor of chemistry and chemical biology at Rutgers University who said: “NEWLY RELEASED documents provide details of US-funded research on..coronaviruses at the Wuhan Institute of Virology. The Intercept has obtained more than 900 pages of documents detailing work of EcoHealth Alliance at the Chinese lab.

“The trove of documents includes two previously unpublished grant proposals that were funded by the NIAID, as well as project updates relating to the EcoHealth Alliance’s research, which has been scrutinized amid increased interest in the origins of the pandemic.

“The materials confirm the grants supported the construction–in Wuhan–of novel chimeric SARS-related coronaviruses that combined a spike gene from one coronavirus with genetic information from another coronavirus, and confirmed the resulting viruses could infect human cells.

“The materials further reveal for the first time that one of the resulting novel, laboratory-generated SARS-related coronaviruses–one not been previously disclosed publicly–was more pathogenic to humanized mice than the starting virus from which it was constructed.

“The documents make it clear that assertions by the NIH Director, Francis Collins, and the NIAID Director, Anthony Fauci, that the NIH did not support gain-of-function research or potential pandemic pathogen enhancement at WIV are untruthful.”

One of the grants, titled “Understanding the Risk of Bat Coronavirus Emergence,” outlines an ambitious effort led by EcoHealth Alliance President Peter Daszak to screen thousands of bat samples for novel coronaviruses.

The research also involved screening people who work with live animals. The documents contain several critical details about the research in Wuhan, including the fact that key experimental work with humanized mice was conducted at a biosafety level 3 lab at Wuhan University Center for Animal Experiment — and not at the Wuhan Institute of Virology, as was previously assumed.

The documents raise additional questions about the theory that the pandemic may have begun in a lab accident, an idea that Daszak has aggressively dismissed.

The bat coronavirus grant provided EcoHealth Alliance with a total of $3.1 million, including $599,000 that the Wuhan Institute of Virology used in part to identify and alter bat coronaviruses likely to infect humans.

Even before the pandemic, many scientists were concerned about the potential dangers associated with such experiments. The grant proposal acknowledges some of those dangers: “Fieldwork involves the highest risk of exposure to SARS or other CoVs, while working in caves with high bat density overhead and the potential for fecal dust to be inhaled.”

Alina Chan, a molecular biologist at the Broad Institute, said the documents show that EcoHealth Alliance has reason to take the lab-leak theory seriously. “In this proposal, they actually point out that they know how risky this work is.

They keep talking about people potentially getting bitten — and they kept records of everyone who got bitten,” Chan said. “Does EcoHealth have those records? And if not, how can they possibly rule out a research-related accident?”

According to Richard Ebright, a molecular biologist at Rutgers University, the documents contain critical information about the research done in Wuhan, including about the creation of novel viruses. “The viruses they constructed were tested for their ability to infect mice that were engineered to display human type receptors on their cell,” Ebright wrote to The Intercept after reviewing the documents.