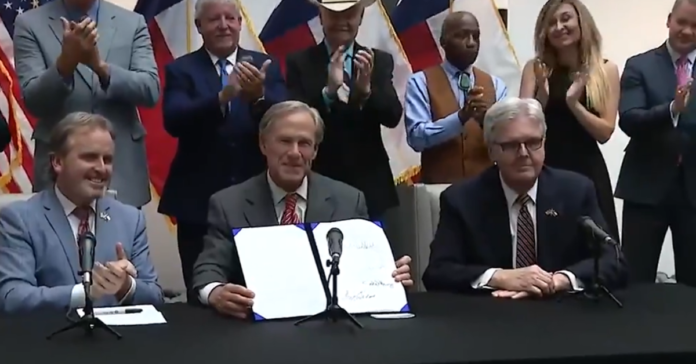 Texas Republican Gov. Greg Abbott followed through on a promise and signed a new voting bill into law after the Dems delay tactics failed.

“It does make it easier and than ever before for anybody to go cast a ballot. It does also, however, make sure it is harder than ever for people to cheat at the ballot box,” Abbott said when he signed the bill into law.

“One thing that all Texans can agree on is that we must have trust and confidence in our elections. The bill that I’m about to sign helps to achieve that goal,” Abbott said during the bill-signing event.

“The emotional reasons for not voting for it are that it creates hardships for people because of the color of their skin and their ethnicity, and I am part of that class of people,” state Rep. Garnet Coleman (D) said.

“SB 1 is an appalling, anti-democracy effort by Texas Republicans to construct barriers to voting for people they believe will not support them,” Eric Holder, the US attorney general under then-President Barack Obama, said in a statement.

“What makes this bill and similar ones Republicans are pushing across the country even more un-American is that Republicans are using the ‘Big Lie’ about the 2020 election as a pretext to support them,” he added.

Holder continued: “The reality is that these bills have nothing to do with election integrity or security, but rather are discriminatory measures making it harder for all people to vote. These bills will have a disproportionate impact on communities of color.”

“The common-sense reforms in this legislation strengthen our trust in the electoral process, from voter registration through the final tallying of ballots. Texans can cast their votes with confidence knowing that they’ll be counted and reported accurately,” said Republican state Sen. Bryan Hughes.

Texas Gov. Greg Abbott (R) on Tuesday signed a sweeping overhaul of his state’s election procedures after months of delay caused by Democrats who sought to block the bill they say will disenfranchise voters.

Abbott made the measure his top priority in two special legislative sessions he called over the summer, the first of which ground to a halt when state House Democrats denied majority Republicans a quorum by fleeing to Washington, D.C.

The legislature approved the bill last week and Abbott signed the measure in Tyler, accompanied by Lt. Gov. Dan Patrick (R) and Sen. Bryan Hughes (R), the lead Senate sponsor of the measure.

“Election integrity is now law in the state of Texas,” Abbott said.