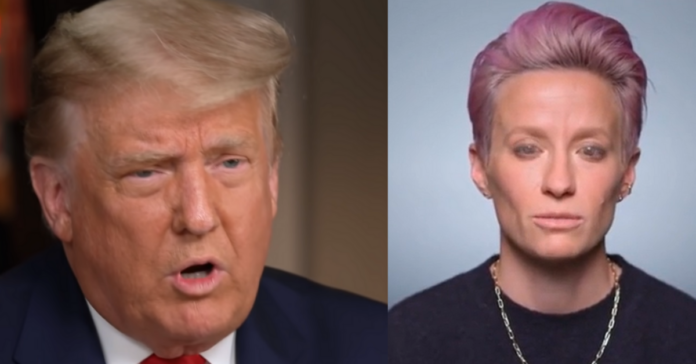 Megan Rapinoe, a malcontents malcontent if ever there was, is at it again and this time she making a comparison that will not only shock her fans but also Trump’s. Rapinoe and Trump have been feuding for years and no one saw this coming. In a new show for HBO, Rapinoe actually compared herself to Trump but that she does it for ‘good.’

“In the same sense, it’s totally the same, you know, still just me and still just doing the exact same thing that I was doing before, just sort of in a much more heightened sense,” Rapinoe said.

“I am who I am all the time,” she said. “It’s not like some act. I mean — I don’t know if I want to make this comparison, but in the same ways that people liked that Trump just said some wild ass shit, but, like, I’m like that, but for good. You know? And like, we need more of that.”

HBO describes the show this way:

LFG is a no-holds-barred, inside account of the U.S. women’s national team’s ongoing fight for equal pay as told by Megan Rapinoe, Jessica McDonald, Becky Sauerbrunn, Kelley O’Hara, Sam Mewis and others.

An official selection of the 2021 Tribeca Film Festival, the documentary film is directed by Academy Award®-winners Andrea Nix Fine and Sean Fine, and produced by the Fines and Abby Greensfelder with Howard T. Owens and Ben Silverman serving as executive producers for Propagate Content in collaboration with CNN Films and HBO Max.

Three months before the 2019 FIFA Women’s World Cup, the players filed a class-action, gender discrimination lawsuit against the U.S. Soccer Federation, which sets the stage for LFG. The film interweaves transcendent athletic performances, including a record-breaking World Cup victory in 2019, with the players’ ongoing pursuit for equal pay.

LFG grants viewers unprecedented access to these game-changers as they meet the physical demands and pressures of being some of the world’s top athletes, while showcasing their courage, unflinching spirit and resiliency in an effort to create long-lasting social change with the biggest fight for women’s rights since Title IX.

A co-captain of the United States’ national team alongside Carli Lloyd and Alex Morgan from 2018 to 2020, Rapinoe is women’s soccer’s most visible and outspoken advocate for equal pay.

Named FIFA’s Golden Boot and FIFA’s “Best Woman Player” in 2019, Rapinoe won gold with the national team at the 2012 London Summer Olympics, and at the 2015 and 2019 FIFA Women’s World Cups.

The Redding, CA native – who currently plays for the OL Reign in Tacoma, WA – is also an outspoken advocate for LGBTQ causes and was also a winner of the prestigious 2019 Ballon D’or Award, the 2019 Glamour Women of the Year Award, and was named one of Time magazine’s “100 Most Influential People” in 2020.

A veteran of numerous NWSL teams including the Chicago Red Stars, Seattle Reign FC and the Houston Dash, McDonald was added to the final roster of the United States 23-player squad for that year’s FIFA Women’s World Cup in May 2019.

McDonald, who grew up in Phoenix, AZ, made an appearance for the team as a half-time substitute in the teams 3-0 win over Chile during the World Cup. She currently plays for the North Carolina Courage and lives with her 9 year-old son Jeremiah in North Carolina.

As of 2021, St. Louis, MO native Sauerbrunn serves as captain of the U.S. women’s national team soccer team after previously serving as captain for the Utah Royals and—from 2016 to 2018—co-captaining the national team with Carli Lloyd.

Sauerbrunn won gold with the national team at the 2012 Olympics and was on the 2015 and 2019 FIFA Women’s World Cup champion teams. A decorated defensive player, Sauerbrunn currently plays for the Portland, OR-based Thorns and in early 2020 she was named the first president of the USWNT Players Association.

“Get a Job!” Is Trending On Twitter As COVID Benefits Run Out Today For Millions Who Made More Money Staying Home