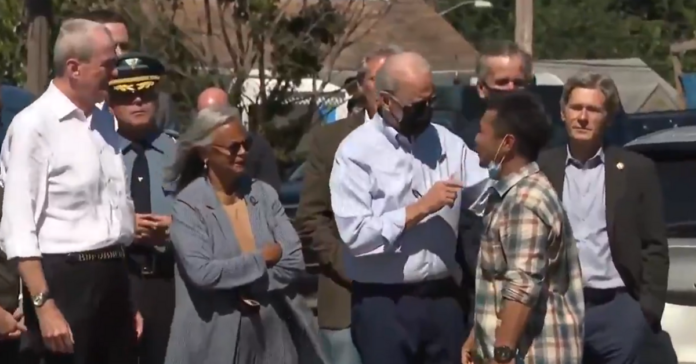 President Joe Biden was heckled at an event in New Jersey today after hearing it from crowds at college football stadiums across the country over the weekend.

Biden’s motorcade was greeted with signs telling him to resign from Trump supporters before he visited a quiet neighborhood to speak to police when onlookers started to heckle Biden over the debacle in Kabul.

“My country is going to sh*t and you’re allowing it,” one woman yelled off-camera. “And I’m an immigrant and I’m proud of this country! I’d give my life for this country. You guys should be ashamed of yourselves.”

“For this guy to pull this sh*t. You leave them in ruins and leave Americans behind.”

“He will leave you behind, you guys protecting him,” one said to the police officers with Biden. “Leave no American behind,” a woman yelled.

President Biden was heckled over the U.S. withdrawal from Afghanistan during a visit to Manville, N.J., on Tuesday to survey damage from the remnants of Hurricane Ida.

“My best friend died in 2011 in Afghanistan for what?” a heckler shouts in a video posted on Twitter by Washington Post reporter Zach Purser Brown.

Biden was touring damage in the village of Manville, which experienced flooding from the remnants of Hurricane Ida, at the time.

The heckler, who was not identifiable in the footage, continued to shout that Biden left Americans behind in the country.

A White House pool report said the heckler appeared to be standing in his yard with his family.

“He will leave you behind, you guys, protecting him,” the heckler yelled. A woman joined in, shouting “Leave no Americans behind!”

The initial heckler then named what he said was his best friend, buried in Arlington Cemetery after being killed in Afghanistan.

Man yells at Biden to resign: “Resign, you tyrant!” pic.twitter.com/qOzxKEwhZE

New Jerseyans call out Biden: “You leave Americans behind!” pic.twitter.com/m5hfrlly5z

“It’s sad that America has come to this.”

BIDEN takes a barrage of heckles from people behind a fence waving a Trump flag as he tours flood damage in the Lost Valley neighborhood of Manville, N.J. pic.twitter.com/dEN8oyu4bM

NO LEVERGE: State Dept. Says It Can Do Nothing to Prevent Taliban From Grounding Evac Flights