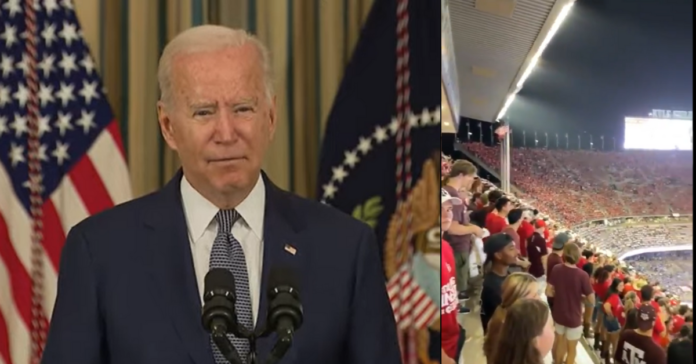 College football fans across the country sent President Joe Biden an unmistakable message by heckling him in multiple stadiums with the chant ‘F**k Joe Biden.”

The videos posted online went viral quickly and surely gave Joe and his team a wake-up call as his poll numbers continue to sink like a stone. One chant happened Thursday night at Brooks Stadium in Conway, South Carolina when Coastal Carolina played host to the Citadel.

And the chant was heard in Texas when Texas A&M played the Kent State Golden Flashes.

And it will only get worse for the Dems and Biden. From The Hill:

Democrats are staring down a nightmare September, a month jam-packed with deadlines and bruising fights over their top priorities.

The numerous legislative challenges in a condensed timeline will test Democratic unity and provide plenty of opportunities for Republicans to lay political traps just a year out from the 2022 midterms, where they are feeling increasingly bullish about their chances.

When lawmakers return to Washington, they’ll have to juggle averting a government shutdown in a matter of days with Democrats’ self-imposed deadline for advancing an infrastructure and spending package that is at the center of President Biden’s economic and legislative agenda and sparking high-profile divisions.

That’s on top of a looming decision about the debt ceiling, a voting rights clash set to come to the Senate floor in mid-September, lingering Afghanistan fallout and, in the wake of a controversial Supreme Court decision, a heated fight over abortion.

A third FUCK JOE BIDEN 🗣 chant from this weekend 😂😂😂 this time at Auburn @OldrowAuburn pic.twitter.com/mBGA64FUwA