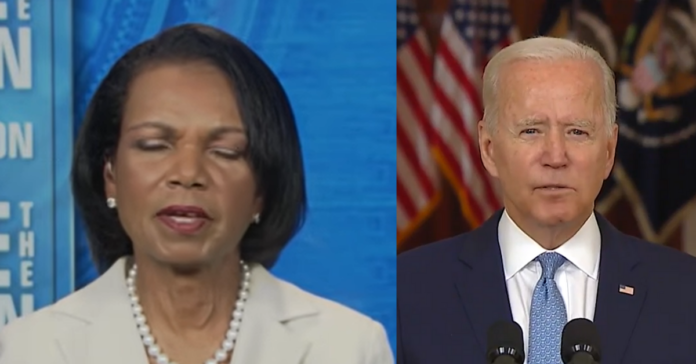 Condoleezza Rice broke her silence on President Joe Biden’s debacle in Kabul by pointing out a few tragic flaws in Biden’s bungled plan.

“For instance, we know that the Taliban don’t fight in the winter; there is a fighting season in Afghanistan. It would have been perfectly logical to wait until they had gone back into the mountains of Pakistan.

“I think it would have been wise to hang on to Bagram, maybe even some of our other seven airfields that we had there, so that transport of people out could have been slower, more orderly, could have taken place from more secure locations.

“I’ve been to Hamid Karzai International Airport, it’s not a place that you would want to try and secure.

“I think that there were ways to do this in a fashion that wouldn’t have seen the precipitous fall of Kabul, and where we wouldn’t have had the kind of chaos that we had at the airport.

“The other thing is, I’ve never understood this idea that you telegraph to your enemy, we’re only staying for this long and then we’re going to start to withdraw, and we’re retreating to this place.

“It’s as if during World War II we started broadcasting to the Germans or the Japanese exactly what we planned to do with the battle plan.

“That tendency to want to talk about where we’re moving to and how we’re going to retrench and when we’re going to withdraw, I think has been really one of the most pernicious elements of our military policy over the last several years.

“Credibility is not divisible.

“You can’t lose credibility in one place and maintain it in other places, because people look at the totality of what you’ve become.

“Our allies, who apparently weren’t really consulted properly, but most importantly had signed on to this 20-year war, are now wondering about us.

“And it’s going to take some work to rebuild those relationships , and you can’t just do it with words.

“I’m a former diplomat; I believe in diplomacy, but when it comes to some of the challenges out there where we have bad actors that might try to exploit, it’s going to require some action, too.

“Our credibility’s taken a hit, and we just have to understand that and move on from there.

“I do want to say the men and women of the American Armed Forces, as always, did heroic work to get as many people out as they did under extraordinarily difficult circumstances, chaotic circumstances, where there was no way for force protection.

“We lost 13 brave people, but I just want to say the American Military, again, covers itself in considerable excellence and glory,” she said.

Don Jr. asks "So the Biden Administration lied about vetting and seems to be in the process of aiding and abetting child sex trafficking?"