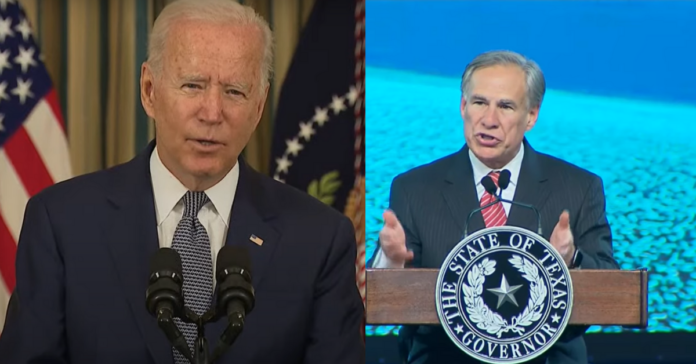 President Joe Biden stepped in it again when he held a short press conference to talk about the disappointing job report. (see video below)

Biden said: “This jobs report shows the steps we’ve taken, passing the rescue plan and vaccinating 175 million people, make our economy capable of growing and adding jobs even in the face of this growing Delta surge. There’s no question the Delta variant is why today’s jobs report isn’t stronger.

“The stock market has hit 40 record highs this year. They can afford to pay a little more,” Biden said of corporations trashing his tax plan. “If we can summon that instinct to unite there’s nothing beyond our capacity,” Biden added.

“The most pernicious thing about the Texas law is it sort of creates a vigilante system where people get rewards to going out and — anyway. And it just seems, I know this sounds ridiculous. It’s almost un-American what we’re talking about.”

Biden has bigger problems to worry about than a new Texas law. According to a new ABC/WaPo poll, his numbers are sinking. When asked the question, do you approve/disapprove of Biden, the American people were clear they are not happy with Joe.

From The Daily Caller:

The U.S. economy added 235,000 jobs in August and the unemployment rate fell to 5.2%, according to Department of Labor data released Friday.

The number of unemployed people decreased to 8.4 million, according to the Bureau of Labor Statistics report. Economists projected 720,000 Americans — roughly three times the actual number — would be added to payrolls prior to Friday’s report, The Wall Street Journal reported.

“Despite the delta variant, there is still an opening up of the service sector of the U.S. economy,” Nationwide Mutual Insurance Chief Economist David Berson told the WSJ. “While that started some months ago, it’s not nearly complete.”

Biden says Texas’ abortion ban is “un-American” and its policy of citizens filing lawsuits over abortions is “the most pernicious thing” about it. He says there could be possibilities for Justice Dept. to “limit the independent action of individuals in enforcing a state law” pic.twitter.com/8kQwjR3FTh

"I've fallen in line for over a year with these useless, ineffective mask mandates, and I will no more!” [VIDEO]