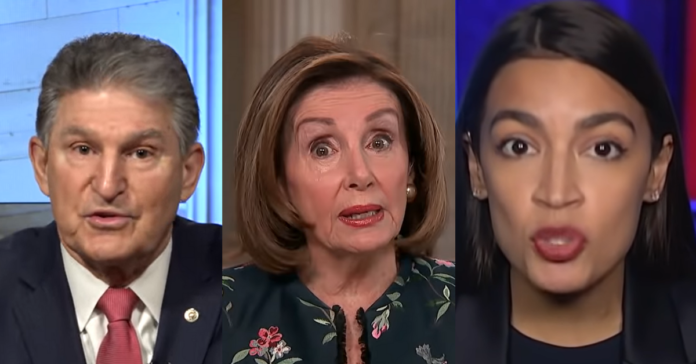 Senator Joe Manchin just ended Nancy Pelosi’s dream of easily passing a massive $3.5 trillion spending bill. Pelosi has no room for error so both AOC and Joe Manchin think they hold all the cards.

Manchin does because no one believes AOC or any House Dem will block a Dem bill, especially after the debacle in Kabul has hit the Dems hard at the polls. But everyone knows Manchin will.

Speaking about the spending package at a West Virginia Chamber of Commerce event, Manchin said we need to ‘hit the pause button, let’s sit back, let’s see what happens. We have so much on our plate. We really have an awful lot. I think that would be the prudent, wise thing to do.”

“I, for one, won’t support a $3.5 trillion bill, or anywhere near that level of additional spending, without greater clarity about why Congress chooses to ignore the serious effects inflation and debt have on existing government programs.”

“The nation faces an unprecedented array of challenges and will inevitably encounter additional crises in the future.

“Yet some in Congress have a strange belief there is an infinite supply of money to deal with any current or future crisis, and that spending trillions upon trillions will have no negative consequence for the future. I disagree.

An overheating economy has imposed a costly “inflation tax” on every middle- and working-class American.

“At $28.7 trillion and growing, the nation’s debt has reached record levels. Over the past 18 months, we’ve spent more than $5 trillion responding to the coronavirus pandemic.

“Now Democratic congressional leaders propose to pass the largest single spending bill in history with no regard to rising inflation, crippling debt or the inevitability of future crises.

“Ignoring the fiscal consequences of our policy choices will create a disastrous future for the next generation of Americans.

MANCHIN op-ed: “I, for one, won’t support a $3.5 trillion bill, or anywhere near that level of additional spending, without greater clarity about why Congress chooses to ignore the serious effects inflation and debt have on existing government programs.” https://t.co/1RAXOmCdBt

Senator Joe Manchin said fellow Democrats should “hit the pause button” on a $3.5T package — presenting a clear challenge to the effort by party leaders to get the tax-and-spending plan through the evenly divided Senate in the coming weeks.