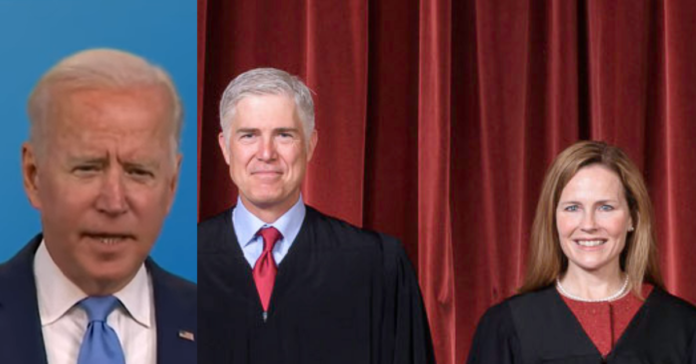 President Joe Biden has a brand new crisis on his hands and the left will not forgive him when he loses the battle he just picked with the Supreme Court. Biden is furious, like many on the left, with the landmark abortion ruling.

So he fired back today with a bunch of empty words that expose how weak of a hand he is really holding. He doesn’t have the votes to add more judges to the court and he doesn’t have the 60 votes needed in the Senate to make a new abortion law so he will have to live with whatever the courts decide.

Biden said: “The Supreme Court’s ruling overnight is an unprecedented assault on a woman’s constitutional rights under Roe v. Wade, which has been the law of the land for almost fifty years.

“By allowing a law to go into effect that empowers private citizens in Texas to sue health care providers, family members supporting a woman exercising her right to choose after six weeks, or even a friend who drives her to a hospital or clinic, it unleashes unconstitutional chaos and empowers self-anointed enforcers to have devastating impacts.

“Complete strangers will now be empowered to inject themselves in the most private and personal health decisions faced by women. This law is so extreme it does not even allow for exceptions in the case of rape or incest.

“And it not only empowers complete strangers to inject themselves into the most private of decisions made by a woman—it actually incentivizes them to do so with the prospect of $10,000 if they win their case.

“For the majority to do this without a hearing, without the benefit of an opinion from a court below, and without due consideration of the issues, insults the rule of law and the rights of all Americans to seek redress from our courts.

“Rather than use its supreme authority to ensure justice could be fairly sought, the highest Court of our land will allow millions of women in Texas in need of critical reproductive care to suffer while courts sift through procedural complexities.

“The dissents by Chief Justice Roberts, and Justices Breyer, Sotomayor, and Kagan all demonstrate the error of the Court’s action here powerfully.

“While the Chief Justice was clear to stress that the action by the Supreme Court is not a final ruling on the future of Roe, the impact of last night’s decision will be immediate and requires an immediate response.

“One reason I became the first president in history to create a Gender Policy Council was to be prepared to react to such assaults on women’s rights.

“Hence, I am directing that Council and the Office of the White House Counsel to launch a whole-of-government effort to respond to this decision, looking specifically to the Department of Health and Human Services and the Department of Justice to see what steps the Federal Government can take to ensure that women in Texas have access to safe and legal abortions as protected by Roe, and what legal tools we have to insulate women and providers from the impact of Texas’ bizarre scheme of outsourced enforcement to private parties,” Biden said.

I am launching a whole-of-government effort to respond to this decision — looking specifically to HHS and DOJ to see what steps the federal government can take to insulate those in Texas from this law and ensure access to safe and legal abortions as protected by Roe.

Their Reaction Is Priceless When Iraq War Veteran Stands Up In Middle of Red Lobster and Asks "Who voted for Biden?