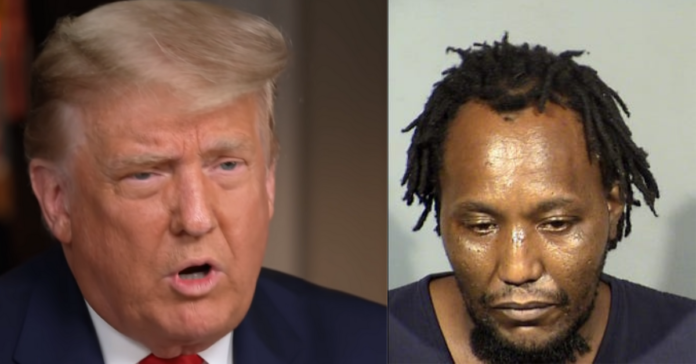 Detroit native Dandre Lundy, 44, was booked Tuesday in the Clark County Detention Center on multiple felony charges, including making a bomb threat at Trump’s Las Vegas hotel. The man told investigators he made the fake bomb threat because ‘Trump had messed up his life for the last three years.’

“While being detained, without any provocation from detectives, Lundy made an excited utterance of ‘Can I get my suitcase back from Trump? I told them it’s a bomb, no one got hurt, so there’s no crime,’” the police report said.

Lundy told police he flew from Michigan the day before and wanted to “send Trump a message that he is a ‘beast’” by leaving a suitcase with a rock, a $1 bill, a Bible, and handwritten “scriptures” supporting his claim.

According to the report from the Las Vegas Metropolitan Police Department, Lundy left a suitcase and duffel bag near a concierge station at the Trump International Hotel around 12:40 p.m. Tuesday. He then said: “Everybody needs to leave the building there is a bomb in here.”

After that he waved to the cameras and left in the same taxi he arrived in.

From The Detroit News:

Hotel security and employees evacuated the lobby and a restaurant. Minutes later, Lundy called in a bomb threat to a worker, police wrote. The caller ID listed his name.

A bomb squad checked the suitcase and bag he left and found no explosive materials.

Detectives tracked Lundy to a nearby Motel 6.

…Lundy appeared before a judge Wednesday.

The judge set his bail at $60,000 and gave prosecutors until Sept. 7 to file a criminal complaint.

Dandre Lundy told police he put a Bible, a rock, a $1 billion, and handwritten scriptures in a suitcase and left it at a hotel service desk near the Trump hotel. He wanted to send a message to the former president that he ruined his life. https://t.co/uqxjkptkgb

Las Vegas Metropolitan Police released information about the man who caused Trump Hotel & Fashion Show Mall to go into lockdown yesterday after he made bomb threats.

Las Vegas Metropolitan Police confirm person entered Trump Hotel in Vegas left two suspicious packages in lobby and yelled “there is a bomb” and ran.
Hotel got two calls shortly after claiming bombs were in the Trump Building pic.twitter.com/Y4jEn9g9pT