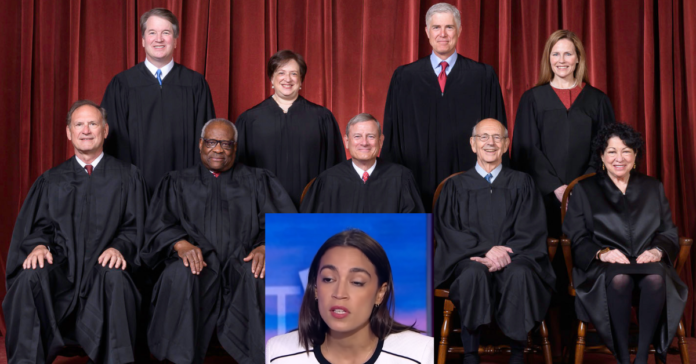 Rep. Alexandria Ocasio-Cortez, D-N.Y., is furious at the Supreme Court over the landmark Texas abortion law. She is claiming the ruling overturned Roe v. Wade, and now she wants the Dems to end the filibuster and expand the Supreme Court.

AOC said: “Republicans promised to overturn Roe v Wade, and they have. Democrats can either abolish the filibuster and expand the court, or do nothing as millions of peoples’ bodies, rights, and lives are sacrificed for far-right minority rule. This shouldn’t be a difficult decision.”

The Supreme Court, however, did not explicitly overturn Roe v. Wade but instead said their decision is not a judgment on whether the law itself is legal and suggested it will be fully litigated soon.

“In reaching this conclusion, we stress that we do not purport to resolve definitively any jurisdictional or substantive claim in the applicants’ lawsuit. In particular, this order is not based on any conclusion about the constitutionality of Texas’s law, and in no way limits other procedurally proper challenges to the Texas law, including in Texas state courts,” the court said.

“No, Roe v. Wade was not overruled tonight. But the ease with which Texas purported to bulldoze the Court’s abortion jurisprudence tells you all you need to know about the right to choose before this Court.”

A sharply divided Supreme Court on Wednesday night refused to block a Texas law that bans most abortions, leaving the country’s most restrictive abortion measure intact.

Just before midnight, the court denied an emergency request from abortion providers to block the law, issuing a 5-4 ruling with Chief Justice John Roberts joining the court’s three liberal justices in dissent.

The majority, citing procedural complexities, said abortion providers had failed to make a persuasive case for the court to step in, but added that the challengers had raised “serious questions” about the law’s constitutionality.

Justice Sonia Sotomayor, in a fiery dissent that was joined by her two fellow liberal justices, called the ruling “stunning.”

“Presented with an application to enjoin a flagrantly unconstitutional law engineered to prohibit women from exercising their constitutional rights and evade judicial scrutiny, a majority of Justices have opted to bury their heads in the sand,” Sotomayor wrote.

Republicans promised to overturn Roe v Wade, and they have.

Democrats can either abolish the filibuster and expand the court, or do nothing as millions of peoples’ bodies, rights, and lives are sacrificed for far-right minority rule.

This shouldn’t be a difficult decision. https://t.co/GcEjkxt3gs