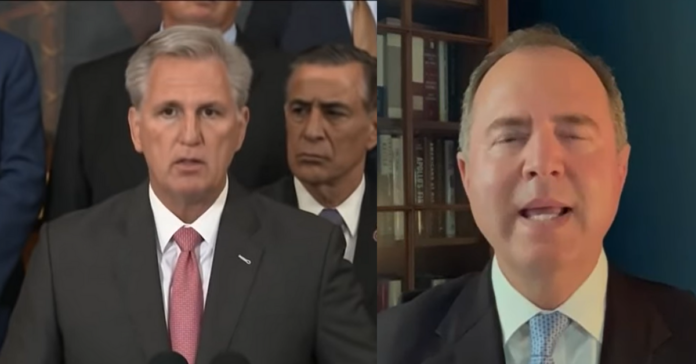 House Minority Leader Kevin McCarthy overruled Adam Schiff and issued a warning to companies not to cooperate with the House select committee investigating January 6. The Committee has requested information on multiple GOP lawmakers as well as Trump’s family from multiple corporations.

“If these companies comply with the Democrat order to turn over private information, they are in violation of federal law and subject to losing their ability to operate in the United States,” McCarthy said.

“If companies still choose to violate federal law, a Republican majority will not forget and will stand with Americans to hold them fully accountable under the law,” he added.

“The Select Committee is investigating the violent attack on the Capitol and attempt to overturn the results of last year’s election. We’ve asked companies not to destroy records that may help answer questions for the American people,” committee spokesman Tim Mulvey said.

“The committee’s efforts won’t be deterred by those who want to whitewash or cover up the events of January 6th, or obstruct our investigation.”

The letter to Google asks for all email messages, Google Drive files, and location history and deletion records. The request to Facebook and Twitter likewise asks for all communications.

The phone companies included in the request have been asked to retain all text messages, cell site location data and call data, which would show who called whom and detail how long they spoke. Letters to the other websites ask more broadly for user data.

While the committee did not make public the names of the lawmakers whose records it is targeting, multiple sources familiar with the panel’s work have confirmed for CNN that the records of several members of Congress are among those the committee would like to be preserved.

The committee has not formally requested any documents, but instead has just asked that records be preserved in the event the probe requires them.

McCarthy’s suggestion that cooperating with the committee could be illegal may make it more difficult for the committee to obtain records.

A question for every Democrat in Congress: Do you stand behind President Biden’s decision to leave Americans behind in Afghanistan? pic.twitter.com/XhxCGTo41O

Gold Star Mother Questions Biden’s Competency: “You trusted our enemy to allow who would come through, no one has to have a military background to know that that was not going to go down well”

Meghan McCain turns against Biden in emotional tweet "I once thought I truly knew Joe Biden...God help our country"